I spent the weekend in the north Georgia mountains with my closest friends. Fall is just beginning here in Georgia, and it still reaches close to 80 degrees on some days. But it’s close, and you can feel it. A chill in the mornings, and when the sun is dimmed by clouds, it feels like October. We are just on the cusp of something new. 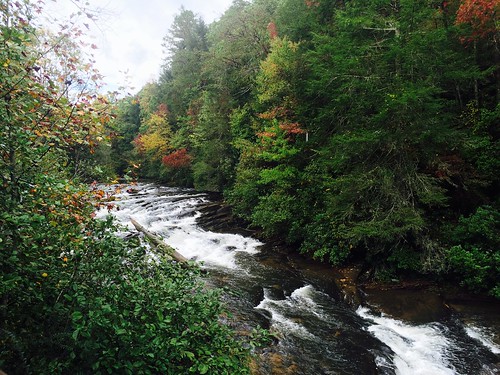 It was almost dark by the time we got to the cabin on Friday. We arrived to turn on the oven and bake the dinner I’d prepped. We lit candles and opened wine and settled into the cozy space that was ours for the weekend. I never miss a beat with these few. It can be days or weeks or months between get-togethers, and it feels like it always ever did. After dinner, we explored the outside of the cabin a bit. Jittery like a little kid with all the darkness and isolation around us. I live in a fairly roomy area of the Atlanta suburbs, but even so, I can forget what it really feels like to be removed from lights and houses and shopping centers and restaurants until I venture somewhere like this. 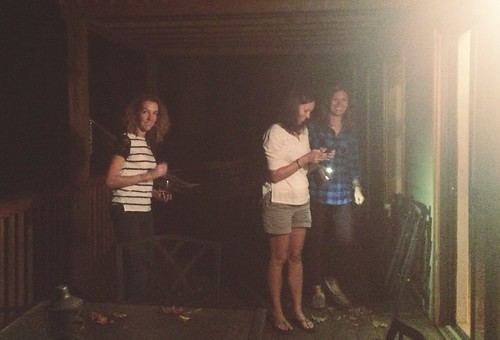 We talked a lot on Friday about changes and thresholds in life. I read once that we have rituals for all kinds of experiences – weddings, funerals, birthday parties, etc. You use those rituals to remind yourself that a chapter is done and another is beginning, and sometimes if a ritual doesn’t exist for something you are encountering, you just have to invent one. We decided to create some rituals of our own this weekend as each of us, in her own way, is moving forward to something new and burning away the old. The landscape of fog and barely tinged leaves was a perfect backdrop for that idea. A moment to settle in to the reality of what is left behind and what is to come. 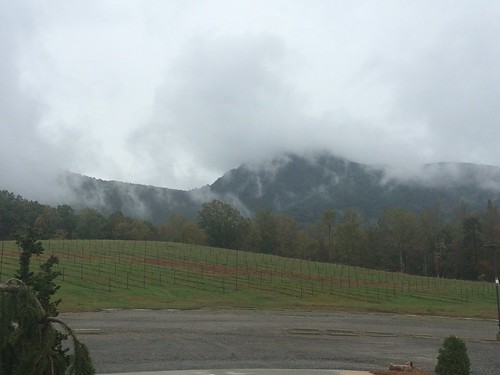 Saturday was drizzly and gray all day, but it didn’t bother us in the least. We ventured to a couple of local wineries and enjoyed back country roads. 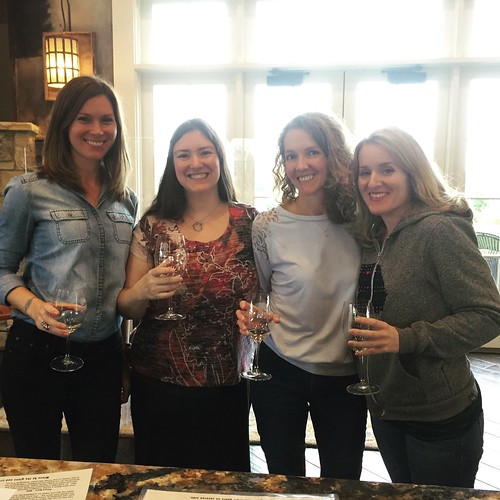 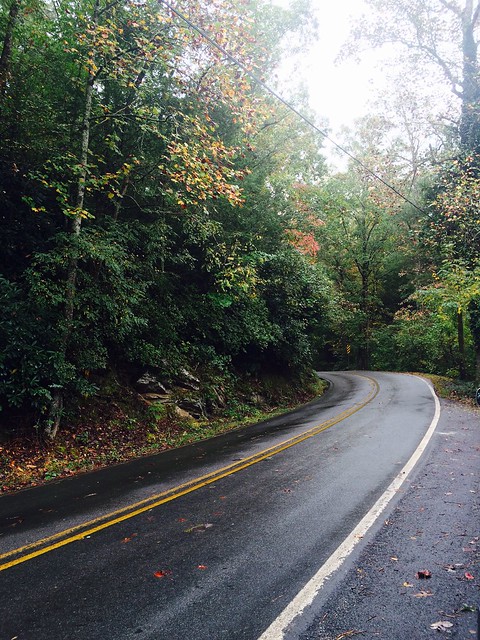 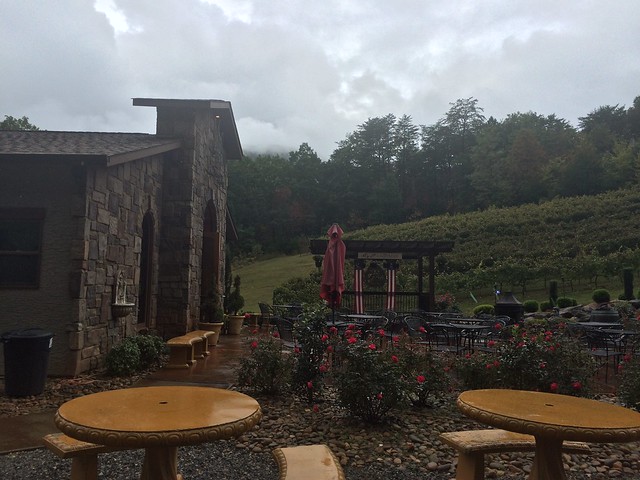 The second winery we stopped at was tiny and quaint, and they had a small fridge of cheeses and a fireplace when you walked in. After a little tasting, the woman who worked there suggested we buy a bottle and head around the back to the small “grotto” they have with live music. We followed her suggestion, and the rain scared away much of a crowd, so it was almost empty. We talked and laughed and just lingered in that way that wine and music and gray skies inspires. It was perfect.

After staying there for a while, we drove a bit more to find funky roadside pottery and fun spaces. 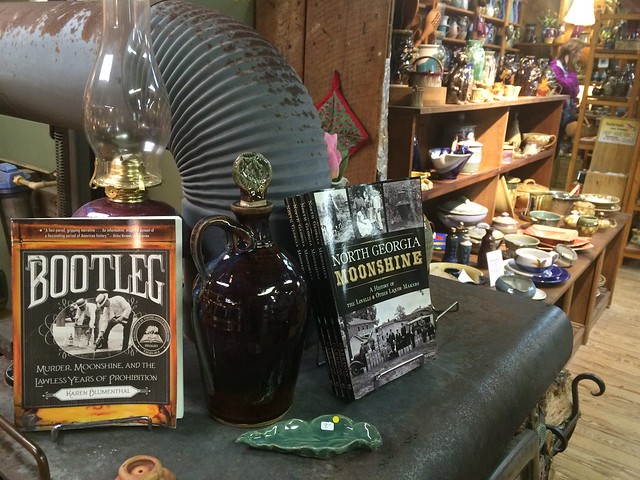 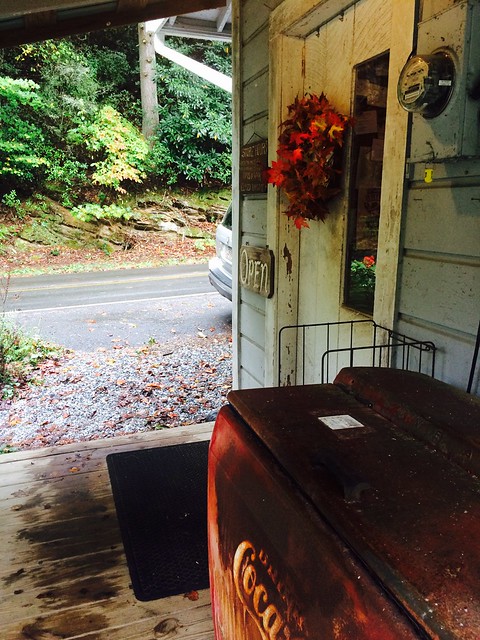 The very best parts of the weekend were those little nondescript moments though. Huddled in a cabin with rain outside and space to breathe. Space to talk and laugh and share without judgment or expectation. 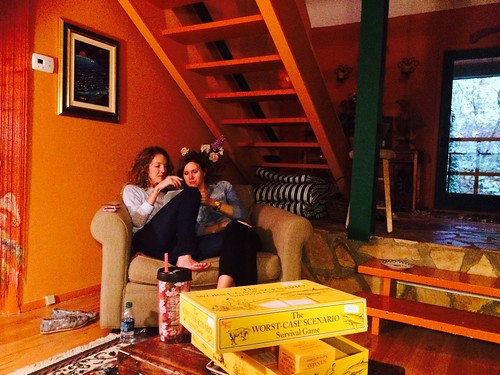 A friend sent me a text last January with that Cynthia Occelli quote that reads, “For a seed to achieve its greatest expression, it must come completely undone. The shell cracks, its insides come out and everything changes. To someone who doesn’t understand growth, it would look like complete destruction.” Since then, I’ve thought a lot about the rhythm of seasons and the metaphor of growth in my own life. You go through periods, I think, when all you can do is the next right thing. One after the other. And you do the best you can, but it is painful and you feel buried, so to speak. Your shell cracks and it’s rough there for a while. It feels like complete destruction for certain. But the growth emerges eventually. Seasons change. Life moves forward. You find yourself different and bigger and stronger. 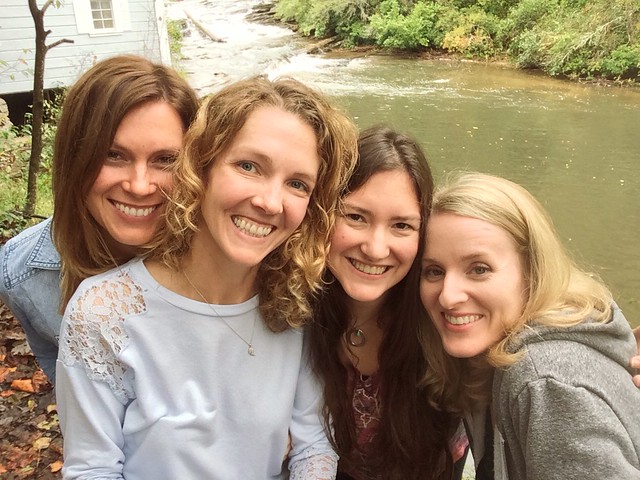