I went to bed last night exhausted and deflated in that perfect way that a full weekend can leave you. I wish I had another day to recover from this past week, but Monday waits for no one, and my alarm felt even earlier than usual today.

I took half a day off last week to chaperone a kindergarten field trip with Jude. Apparently there’s a small wildlife preserve and zoo nearby that I hadn’t even heard of until the permission slip made its way home. I couldn’t believe a few northbound, winding roads lead me to lions and alligators and white tigers and all sorts of unique creatures to look at. 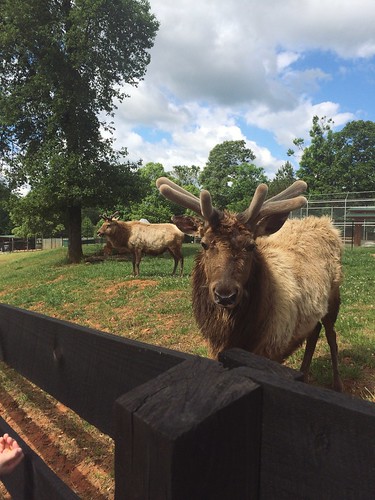 It was far smaller and less crowded than a city zoo, and the walking trails were leisurely – even with the madness of a group of school kids. It was so rewarding to watch him play and interact with his classmates as they laughed in disbelief at how close they came to some of the animals. The unusual cool snap was weird for Georgia May, but its short-lived timing made for a fun day. 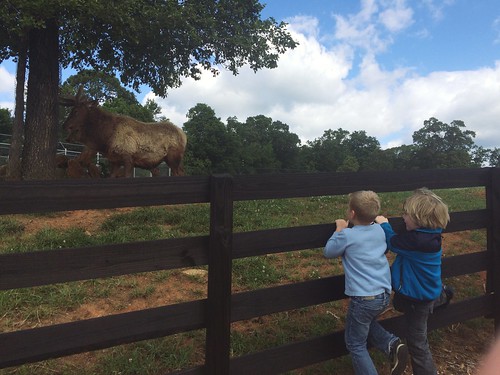 It was close to 9pm when I got home from our graduation ceremony on Friday night. That event usually brings relief as it always signifies the end of the academic year, but somehow I’m not really slowing down yet. Assessment tasks lie ahead and a few committee meetings, and I’m realizing that my calendar doesn’t really slow down until the kids’ lives reach a slower pace. To be honest, I am counting down the days (18 to be exact) until we are officially on break.

Saturday morning brought a birthday party for Norah’s classmate at what is unarguably her favorite place on earth. She was in heaven. 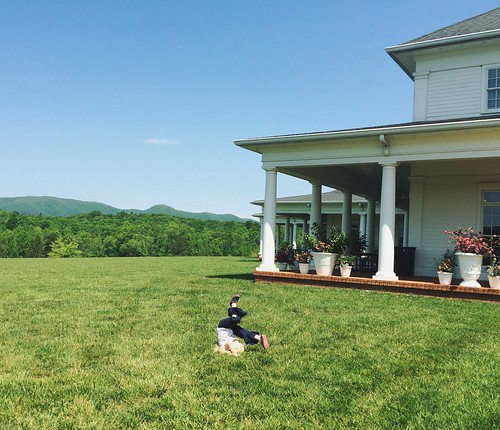 I’d already promised her a trip there and a new doll for her own birthday before this invitation came, so this made for a lucky chance to celebrate a little friend and also get Norah’s gift as we left. She wanted a boy baby this time, and she named him Daniel. 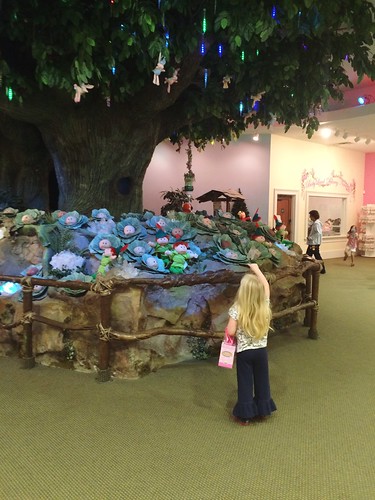 It makes me laugh to see how much she loves this place, but I admit there is something so weirdly charming about it. Maybe it’s the memories from my own childhood summer trips there with my sister and cousins. Or that very particular powdery smell on a Cabbage Patch Doll. Maybe it’s the feel of the space on the side of the road growing wider and wider as you drive northward toward the mountains and find it perched on a hill around absolutely nothing else. 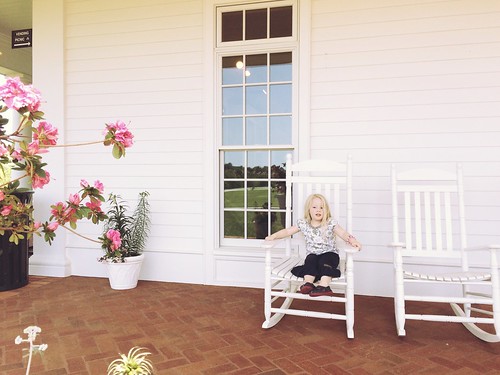 Whatever the case, it might as well be Disney World to her. It’s just as special seeing it through her eyes as it was to me as a child. We drove home tired and happy, and I spent the rest of Saturday afternoon planting flowers and herbs in containers on my back patio. Summer is almost here.

Sunday brought Mother’s Day which – as all the holidays go – was not so hard this year at all. The “firsts” are over, and here we go again. I don’t care in the least about the gifts or lack thereof, especially at this stage of life with such young kids. (I’m certain gifts were never at the top of my love languages anyhow.) We settled in for a picnic at the lake which is exactly what I wanted. Just time with the three of us doing something that felt special.

This spot never feels ordinary, but we haven’t been since last July, so it felt especially good to spend a few hours there yesterday. An inauguration of long summer days to come. 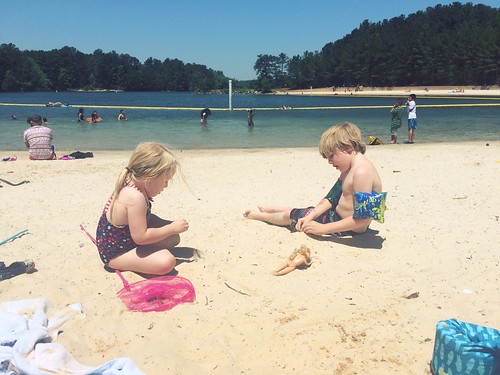 I feel incredibly lucky about so many things in my life, and where I live is pretty close to the top of the list. We are an hour’s drive from the mountains and minutes from the lake, and the longer we are here, the more we discover sweet spots hidden here and there. 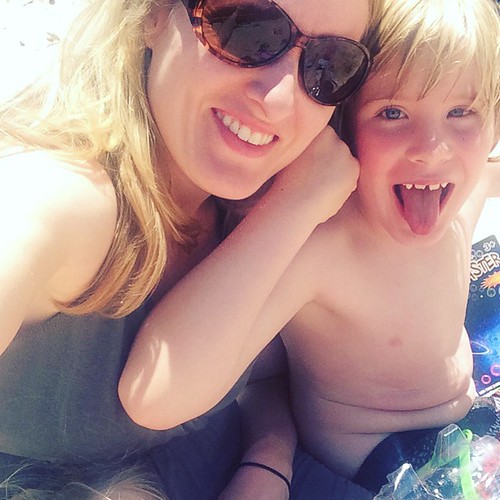 I have a lot of love for my home state, and we are fairly close to where I grew up, but this particular space is all ours with sights that are becoming more comfortable and familiar with every passing month. I’m watching the two of them develop roots here and know places by name, and it feels good to see their budding familiarity. There’s a lot of freedom that comes with belonging. 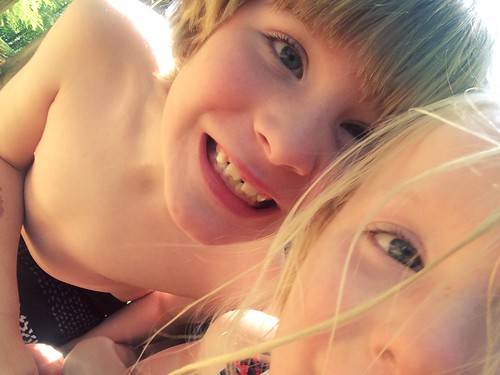 We left the lake sandy and sleepy and stopped for boiled peanuts on the way home. A couple hours later, we headed to my grandparents’ place to celebrate Mother’s Day with family. You can create a sense of home anywhere in the world; I’m sure of that. But there is something to be said for watching your own kids grow up among the same familiar landscape you did. They played outside with their cousins for hours, and we got home just in time for bed. 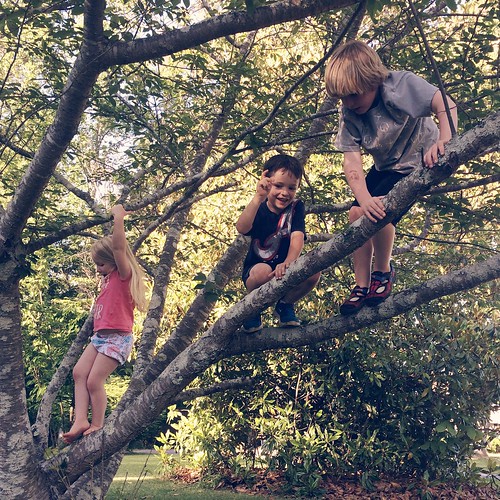 Jude awoke with a night terror last night around 11. He’s done this three or four times in the past few weeks, and it’s scary to witness. He shakes all over and cries and mumbles nonsense, and though his eyes are open, he’s not really awake. The shaking was so terrible last night that I turned on a light and got him water to drink, hoping he’d snap out of it and settle back down. (And of course now I’m reading today that you aren’t really supposed to do that, but it’s better to just be there so they don’t get hurt and try to guide them back to bed.)

He has no idea where he is when this is happening – mostly because he is not awake at all but still in a state of deep sleep. I know I’ve felt that panic on a much lesser scale at moments in my past when I felt like I wasn’t quite sure where I was, figuratively speaking. But our feet are on solid ground now with familiar spaces and sights but also familiar routines that belong to the three of us. There’s so much space to be found in belonging somewhere.  The circle we know can somehow give us the strength and permission to reach outside of it to something bigger and brighter.

I read a lot of blogs.  The internet is like one huge magazine I don’t have to pay for, and at night after Jude has gone to bed, it’s often the way I choose to wind down and relax.  I’ve received so many ideas I wouldn’t have thought about otherwise and some valuable inspiration in the kitchen and the home. So earlier this week, I was thinking about what I wanted to spend my monthly budgeted “me money” on, and I remembered a book that was recommended on a high-profile blog that I read often.  So I googled, and in the process of looking for an answer to my book question, I discovered a host of hater blogs out there devoted to certain bloggers.  These are women who write entries slamming other women and explaining why xyz blogger is terrible.   This was a new phenomenon to me as I usually just head straight to a site or find something through another site’s blogroll, etc.  But really.  They’re out there.  Women who spend time and energy posting about how much they hate other people they don’t even know who have web journals of their own lives that don’t even affect anyone else.  And among the things these women loathe and make fun of excessively is the mother who posts lots of photos and writes about how surprisingly fulfilling motherhood is and how much she loves and cherishes this role.

That pretty much describes this little journal.

I’m sappy at times.  I’m emotional at moments.  But I’m honest as well, and I like my job.  I really do.  I fully understand that this is a season of my life that doesn’t last forever, and that I will be moving on to other moments and other challenges sooner than I realize, but for now, I love my daily life.  And I sometimes write about it and take photos of it and share it with some of you, and you can read it or not read it.  I love the sense of community the internet offers which is why I’m not scribbling all of this in some handwritten journal somewhere, but I’m just not really interested in the pointless negativity.

And truth be told, this is just one more facet of The Mommy Wars.  She doesn’t do things they way I do?  Let me tell you why she sucks and I am so much better.  I don’t even have to go through the list of controversial motherhood topics because we all know what they are.  But just for today can we put all that aside?  (Hater bloggers and competitors in the Mommy Olympics, I’m talking to you.)

I think last Mother’s Day was the first time I really got it, the first time I really understood what the day was about.  For me, it’s a time to celebrate with my little family and feel grateful for the precious role I have and what I get to learn in that life.  But it’s also a time to say to other mamas, “I get it.”  It’s hard and it’s lovely and it’s lonely and it’s beautiful and it’s scary, and it’s all those things at the same time.  And every step of the way, you are just praying that you make the right decisions.  I get it, and we are the same.  Because whether you use breast or bottle, whether you co-sleep or sleep train, whether you spank or not, whether you openly gush about your personal fulfillment or count down the minutes to bedtime (who hasn’t done that one?), you love a little person with a crazy fierce, gut-pulling, bigger-than-anything kind of emotion, and that’s where we are all the same.

It’s not always fun.  It’s often messy.  And it’s never easy.  But when you look past the rough patches, it’s a good gig.  Am I right mamas?

Happy Mother’s Day!  And to my own Mom and my sweet Grandmother, every time my heart swells with love for Jude, it swells with gratitude for you as well.  I get it now.  And I love it.