Fall is over in a blink in Georgia, so I’m trying to take it all in. We are sleeping with the windows open, but I always wake in the middle of the night to feel a chill and then close the window pane and spread the extra blanket over the bed. I made our favorite soup last week, and I’m already craving it again. My school days are busy with the frantic pace of midterms and the grading pile that ebbs and flows, but I live for the afternoon light everyday. What is it about October light just before dinner that makes it so perfect? I wish I could bottle it up for January’s darkness. 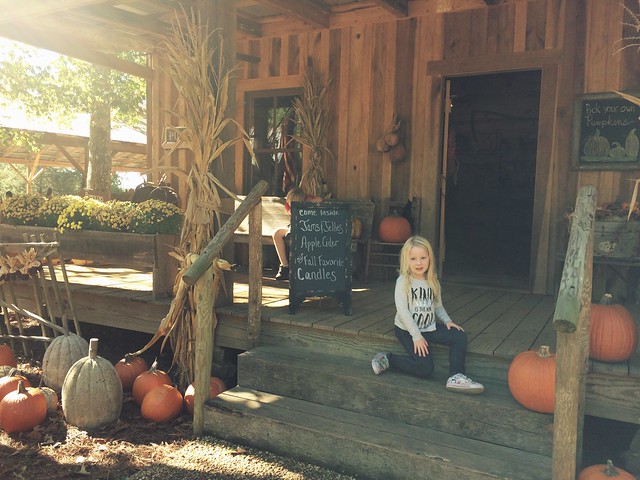 Saturday brought a soccer game followed by a visit to a local pumpkin farm. It’s a small family operation just down the road from where I grew up, and our families have known of each other for ages. On the way over, I texted my cousin that we were headed there, and she walked over from her house next door to the farm. It feels good to belong somewhere with a long history, but autumn makes you crave it even further. We all settle in a little more snugly, I think. In whatever ways we can. 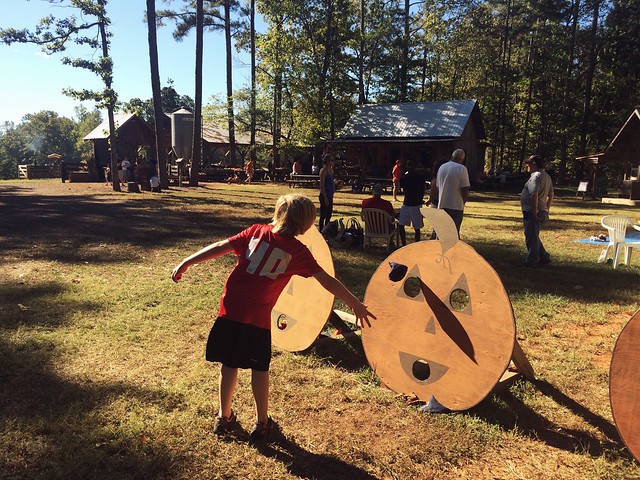 We ate popcorn and boiled peanuts, and I watched cousins get lost and found again in a corn maze. We took the hayride around the pond like we do every year and followed that with the long and important task of picking out the perfect pumpkin. 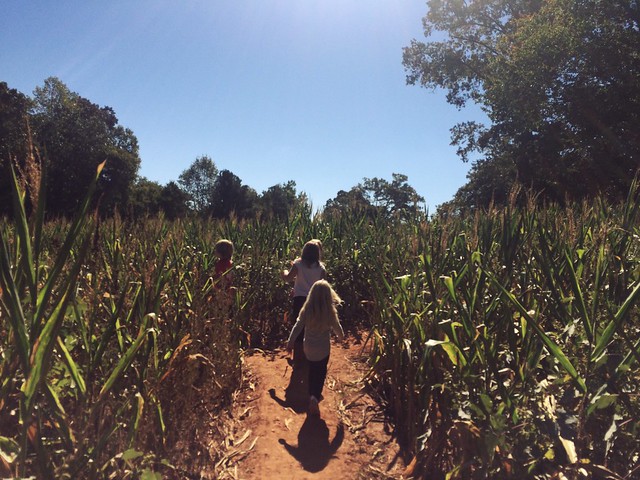 My grandad came with us as he works pretty steadily lately to stay busy and occupied when he can. There is still a hollow spot in the space where she has always been, that lull in the conversation. It is so stark at their house especially, where Norah will wander upstairs when we’re there and say it’s because certain rooms “still smell like Grandmother.” And they do. The scent lingering everywhere – literally and metaphorically.

On the other hand, I’m also finding moments when it’s getting more comfortable in ways as well; her absence is a little more predictable and familiar now – which is always a scary moment in the grieving process. It almost seems like the person lingers and hovers for a while in a very real way. You can feel their touch and see their belongings and hear the voice and smell the scent. They are close for a while to gently ease us out of the solid presence we are so used to, and then they fade a bit so that the haze wears away from your vision, and you can handle what life is sending you next as you create space and possibility instead of loss. Everything she taught me is still here and even somehow distilled to a cleaner and more concentrated form. But her physical self isn’t hovering in the way it first was.

This is life. This is how it goes. Seasons change and leaves fall and people fade from our lives in that way they are made to do. Mary Oliver says, “to live in this world you must be able to do three things — to love what is mortal; to hold it against your bones knowing your own life depends on it; and, when the time comes to let it go, to let it go.” That is so much easier said than done. But here we are, four months after her passing, in the midst of a new season she has never seen. It looks both terrifyingly unfamiliar and newly beautiful all at once.

It’s also Mary Oliver who claims it is worthwhile “to break your heart, by which I mean only that it break open and never close again to the rest of the world.”

As I look back, heartbreak has broken me open again and again. It is never happiness and assurance and predictability that get you someplace new, is it? A decade spent in the classroom – first high school kids and eventually university students – gives me a special glimpse into that phase of life when you feel so sure about everything and everyone. When you assume that the path in front of you will unfold exactly like you see it in your mind’s eye. How funny that loss is what actually moves us on the path if you let it happen and feel it honestly.

Here I am in the thirty-fifth October of my life, and I’m seeing that you really are not capable of understanding that without a few decades on this earth. Life chisels away all the rough edges when we let it. It makes me look forward to the Octobers ahead as I will undoubtedly deepen and soften in ways I don’t yet understand.

Leaves fall and seasons change, and autumn is here to remind me again that nothing is permanent. It’s hard to wait on the hand of time to reveal the treasure to you, but it always does eventually.

It’s easy to forget the way life used to be as we sit in the comfort of 2016’s America. I was talking with someone the other day about the McMansion trend happening in the suburbs. The vaulted ceilings, enormous shiny kitchens, three fireplaces in one home – all of which are rarely used and operated by a light switch. Look back even one generation ago, and these traits would have been rare and now they seem commonplace or stale.

My grandmother grew up in a tiny house with her four siblings. Two bedrooms and a kitchen whose walls you can almost touch with both arms if you stretch far enough. Her mother lived there until she died at the age of 92, and the house is still standing. It’s adjacent to my grandparents’ home, and I noted when I wrote her obituary that she was born and died on the same family span of property – a story that almost never happens anymore.

In the front of that tiny house, stood an old tree that shaded the yard and stands central to my childhood memories of family gatherings and Sunday lunches. Shade in the thick Georgia heat as we’d gather with long tables strung together, one right after the other, and food all the way to the end. Homemade ice cream and cousins and games of tag. Afternoons when we’d begin spread all over the yard and slowly move folding chairs to the shady spot as the sun spread a little higher and hotter overhead when the hours wore on.

A limb fell from the tree last week, and as it turns out, much of it was partially rotted, as trees often do with the passage of time. 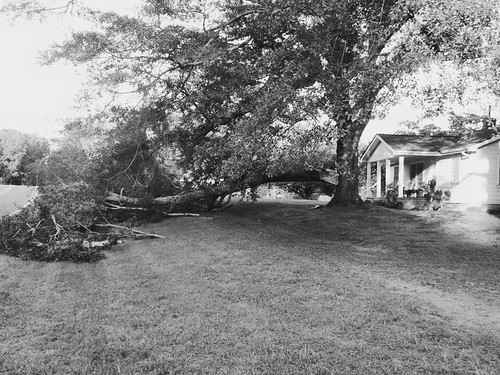 It was taken down on Thursday, and I drove by yesterday. It’s a weird sight to see that house without its tree out front. The whole landscape I know so well altered and feeling exposed, naked. Raw nerves left open when they haven’t closed yet anyway. Change after change after change. It’s only a tree, I know. Except that it’s not.

So many ancient cultures saw trees as more than wooden branches. They’ve been associated with prayer and spirit and protection for thousands of years. It’s easy to see why that is when you look at an old tree. Its wisdom seems to predate and outlast our own. We watch seasons change and colors come and go on the branches. And after every change and loss in the landscape of our real lives, they just seem to watch and listen patiently – a reminder of both what is temporary and what is eternal.

I’ve been thinking a lot this summer about how I was raised, the things I learned without knowing I was learning them, the truths I absorbed. You don’t really think about these things because they become so second nature to you. But as is always the case with death, my grandmother’s passing has me digging back through the loads of memories buried in my own mind and realizing the ways they taught me what I needed to learn.

Do people do this anymore? Do they raise families in tiny homes and see abundance around them instead of need? Do they know third cousins as well as they know siblings? Do they sit on porches and under shade trees for hours on a Sunday afternoon and talk about things other than work or money or pop culture? I think the answer is mostly no, and that makes me sad but also grateful I’ve led the life I have.

I woke this morning to my daily Richard Rohr Meditation in my email inbox, and his subject line read “Rise Up Rooted Like Trees.” Yes, God, I heard you. I’m listening, I’m listening.

Rohr happens to include Rilke, who has guided me so much lately and tells us, “If we surrendered to earth’s intelligence we could rise up rooted, like trees. Instead we entangle ourselves in knots of our own making and struggle, lonely and confused. … This is what the things can teach us: to fall, patiently to trust our heaviness. Even a bird has to do that before he can fly.” The Earth’s intelligence tells us that things rise and fall, live and die. It tells us that we can’t control what is before us, even with vaulted ceilings or three fireplaces. We forget this though. It is a daily struggle for me, in our modern world, to know that you don’t have to be happy all the time, that sorrow and grief have a place in our lives, that our inner landscape is far more important than our outer achievements.

Rohr expands on Rilke a bit by explaining that in nature, “Nothing stays in the same shape or form for long. Plants and animals seem to accept this dying. All of the natural world seems to accept the change of seasons. Nature fights for life but does not resist dying. It learns gravity’s fall, as it were. Only one species resists this natural movement: humans—you and me. … We are free to cling to our own egoic resources, to climb instead of to descend. But we must fall if we are ever to fly.”

I’m grateful for the memories I have of lazy summers spent under the shade of that tree, the shelter it gave us for the conversations that shaped my life and who I’ve become. And I’m grateful for it still, as it fell and was hauled away in pieces. It’s teaching me the most important lesson in its absence. Let go, let go, let go. Life makes us shed our skin again and again. It hurts to become something new.