I am in a stretch of 5 days alone as the kids are on spring break. I’m not on break at the same time, but somehow that makes this time even sweeter. It’s strange for me to get my own self ready for work and focus on only that without the constant hum of school bus schedules and packed lunches and homework in the background. I’m grateful for this few days in front of me.

Friday night I saw Patty Griffin in concert in Atlanta. I sent a hurried text to a friend a couple months ago when the tickets went on sale, and she said yes, so we jumped on it together. It took some planning and last minute rushing to get kids squared away just in time to head downtown and grab dinner before the show.

I’ve been a fan of hers for so long, and I can’t even count the lines that have echoed in my head and on my speakers when I need a little direction. I was listening to “Forgiveness” as I drove to my grandparents’ house that sunny Sunday morning when I got the phone call that my grandmother passed. I had that song on repeat so much during my grandmother’s last weeks. It hit the spot for some unknown reason, as music always works that way. And I raised my voice to the air, and we were blessed.

And a couple of years before that, “Let Him Fly” was on repeat in the earliest weeks, when I was still living in my married home and couldn’t get a minute to think or be alone. I’d take the long way to the grocery store or on the road to an errand and listen to it on repeat like a mantra. It would take an acrobat, and I already tried all that.

She has been my nearly constant soundtrack for these last few years. Something about the solid simplicity of her voice and the call of her lyrics tell me everything is going to be okay. Let the rusty nail no longer hold this world together.. I’m going to let it hear the prayer, no matter who is there, no matter who is listening. Lately it’s “When It Don’t Come Easy” that tears me open and takes me somewhere I can’t get otherwise. I don’t know nothing except change will come, year after year what we do is undone, time keeps moving from a crawl to a run, I wonder if we’re gonna ever get home.

When we left the show, I said to my friend that Griffin is just so solid and real and true. Those were just the adjectives that came out at the moment, but they are also the most fitting ones to say. In a world of Botox and airbrushing and constant reinvention to appease whatever is trending, I think it’s so beautiful to see someone who knows herself well enough to deepen what she creates in the way she has. (This quick PBS interview is a great commentary on that, too.) It was such a great night – and a reminder to me that, at the heart of it, truth and beauty are the same thing.

I’ve been thinking a lot lately about aging – about the ways I feel old and the ways I feel young. Most of all, I’m just feeling like I’m only now getting started. I think it is that first half / second half idea that Richard Rohr speaks so much about (and Jung wrote about it  before he did). I’m only now beginning my second half, so to speak, and everything just feels so vast and wide and deep and true in a way it wasn’t before. What a gift it is that the magical second half really doesn’t depend on how much time has passed or how much time is left, but it’s a change of perspective. It’s not guaranteed for everyone, and it is usually brought about through pain and surrender, but it’s so worth it.

Last week, in passing, I heard someone talking about life and growth and the way she phrased it was that she is “doing so much better in life than they are” and that line rolled around in my head for a while – I don’t even know who the specific they refers to exactly, and this was just quick passing conversation. But it just made me think about that whole better in life perspective that I don’t understand at all anymore. (And to be fair, no judgment. This person is young and square in the middle of those early years where necessary score-keeping and comparison are your ways of life.)

I was reading through some of my daily Richard Rohr email meditations last week, and he elaborated on Jung’s theory of individuation – “the lifelong project of becoming who we were meant to be.” This resonated with me and what I see around me. Rohr says, “How counterproductive our popular culture [in the United States]—with its fantasies of prolonged youthful appearance, continuous acquisition of objects with their planned obsolescence, and the incessant, restless search for magic: fads, rapid cures, quick fixes, new diversions from the task of soul.” I think the thing I’m realizing, and the example I see in artists like Patty Griffin, is that you cannot participate in that chase while also participating in your own individuation. The two processes are mutually exclusive. Rohr continues to explain that if you can pass that threshold to the second half, you “will be freed from having to do whatever supposedly reinforced one’s shaky identity, and then will be granted the liberty to do things because they are inherently worth doing….Ultimately, our vocation is to become ourselves, in the thousand, thousand variants we are.”

There’s so much freedom to be had when you stop playing the game. I could feel that in Griffin’s presence and you can feel that in the art produced by others who do the same. You can feel that in the lightness that illuminates people who compose their own lives in that space of freedom, too. When you aren’t playing the better at life game and you just do your own thing and pause long enough to hear that still and small voice, you stop keeping score. You stop comparing. You draw closer to your vocation and your life starts to take its own shape around you – solid and real and true. Truth and beauty are the same thing.

The forecast calls for springtime this week, and I turn 35 years old in three days. So much new lies ahead.

Jude’s school celebrated Read Across America last week with a theme each day. Friday was “Dress Like a Dr. Seuss Character Day,” so Thursday night had me painting a t-shirt to resemble Thing 2. (He specified that he preferred Thing 2 rather than Thing 1 for whatever reason.) I ordered a wig on Amazon, and I’m sure it will make a yearly appearance and be shared among both kids in the years to come as this seems to be a regular thing. I was on spring break last week, so we could take a leisurely walk to the bus stop that morning, and the sun was parting the clouds a bit. He was so happy to be doing something special. Routine is what keeps me sane, but little celebrations and moments where we reach beyond the ordinary can encourage and energize us so much, too. 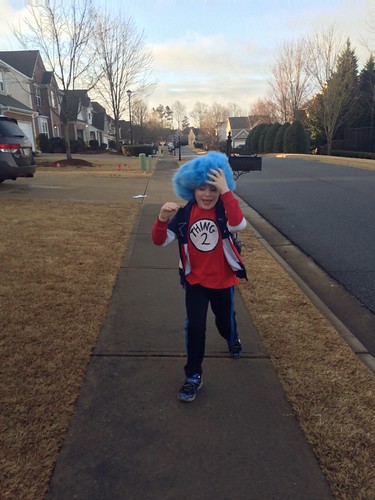 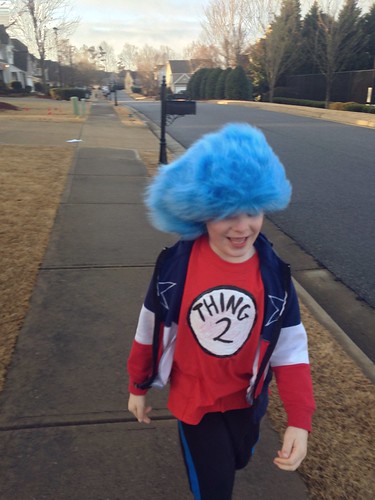 I’m a planner. I know this about myself, and I genuinely cannot remember a time when that wasn’t true. I’ve always been a forward-thinker, and motherhood has only multiplied that exponentially. I make a list every Sunday detailing what we will eat the entire week. I can look ahead on my calendar and tell you what I’m doing weeks from now. The minute one of the kids gets sick, I go into planning mode and think ahead to my week and when I can take off and when I can’t and start making plans to make the delicate balance of our lives make sense in the chaos.

As I’m typing this, I hear the hum of the dryer tumbling laundry, and I’m cooking a chicken in the pressure cooker. And in the back of my mind is the constant soundtrack of what else I need to do this afternoon. It’s always a tightrope I’m walking. Juggling balls in the air to accommodate a job and students and kids at home and the million little things like an oil change or a visit to the accountant at tax time or a follow-up email that is still waiting to be written or the kitchen floor that desperately needs mopping. It’s easy to sometimes worry that one little thing can knock it all down like dominoes. The dance has persistent potential for chaos.

I’m hoping to get better at a few things in my 35th year. And one of those is to allow myself to stop planning in those rare moments of rest, to turn off the “mom brain” and just let it come to me as it will. The little tasks have to be crossed off the list, but I’m hoping to make a conscious effort to bring mindfulness a little further into my daily life. Forward thinking has to happen to get by from week to week, but there is so much value in the here-and-now. 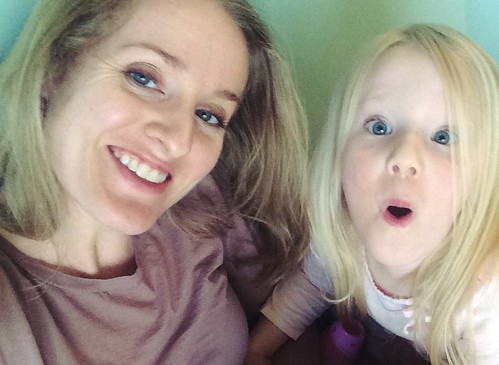 Norah and I were playing around with my phone camera last week, and I was struck my how different we look and feel in those photos – when compared to how we looked and felt just a couple of short years ago. She is nothing like a toddler anymore. All pre-school kid. I’ve got some laugh lines that are creased a little deeper than they used to be. I’ve weathered a few storms in this season of my life and learned lessons I couldn’t have learned any other way. I’m watching the landscape of my face change as my heart gains folds and creases, too. But I’m okay with it. I’m okay with learning and growing and changing, and I wouldn’t turn back to 25 if given the chance. Today feels so much better than a decade ago, and I know myself in ways I certainly didn’t before. I’m on the threshold of something new, I think. And that’s how I want to feel forever and forever.

There’s a quote from the film version of Michael Cunningham’s The Hours that sets me on fire in the best way every time I hear it. One character is asking her own midlife questions and explains to her daughter, “I remember one morning getting up at dawn. There was such a sense of possibility. You know, that feeling. And I remember thinking to myself: So this is the beginning of happiness, this is where it starts. And of course there will always be more…It never occurred to me it wasn’t the beginning. It was happiness. It was the moment, right then.”

That thrill of possibility is it. That big empty page. And I don’t think you have to abandon that feeling when your life is more solid and contained within particular perimeters. We can always hold on to that. But now, at the dawn of my 35th year as I cross the threshold to the second half of this decade for me, I feel grateful for this season that reminds me so tangibly what it feels like to dwell in possibility. I have things to write that I haven’t written yet. Places to go that I’ve never been. I have feelings to feel that I haven’t felt yet. So much awaits.