The kids and I returned from a trip yesterday. As I type this now in my quiet house, they have gone to dad’s for the week, and the laundry is humming with more piles to be done. Suitcases are unpacked, and the refrigerator is restocked. It’s funny how you return from a week away and things are exactly the same as you left them (of course) and it makes you wonder if those days even happened. Our days, all of them, come and go only once – whether we are home or far away. 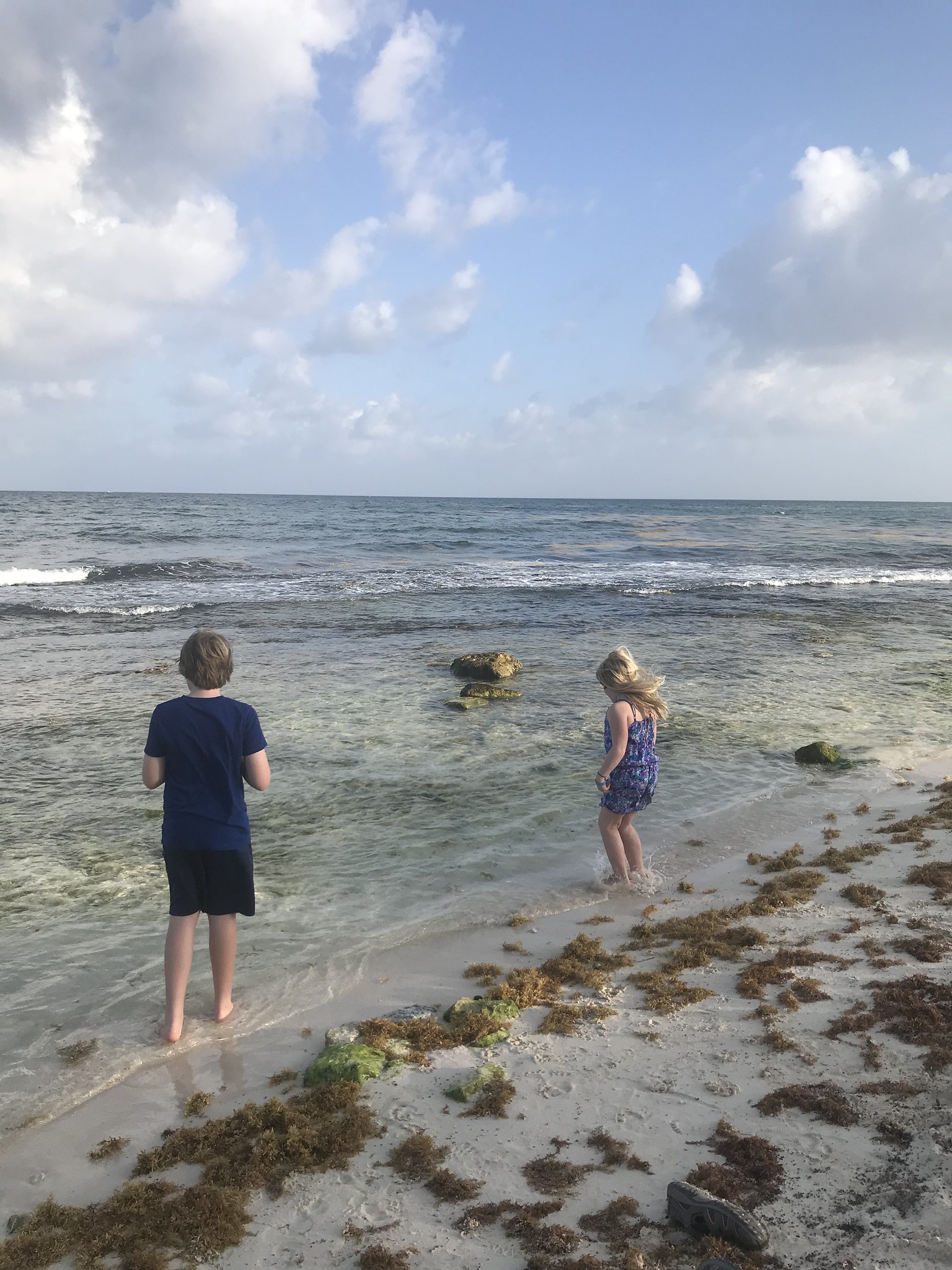 Travel is something I have loved since I spent a summer in England in college and was bitten by the travel bug, as they say. When I was married, we were always going somewhere or planning some excursion. Most of this was simply because my ex husband traveled excessively for work. I was a stay-at-home-mom for three years, and Jude and I would tag along and entertain ourselves in an unfamiliar city while his father worked during the day. Then when Norah was born and I went back to work full-time, that wasn’t so easy, but we’d still cash in travel points every summer to see a new place. It was an interesting season of my life. (Interesting, that annoying word I tell my students not to use because it really means nothing at all.) To clarify – it was a complex time in my life. We got to go on luxurious vacations once a year, sure. Nice resorts and plush hotel beds and new scenery. But the price I paid was a husband who was never home and [free] accommodations that looked nearly the same, no matter what location we were in.

My travel bug has not really gone away, but my household exists on less than half the income it did at that time, and I do not have a pile of frequent flier miles or hotel points at my disposal. I’ve found creative ways to see new things and make memories with the kids while stretching a dollar. Tiny beach condos and yurt camping and cabins on the river. I assumed that a bigger trip was not in the cards for me for quite some time though, so much so that my passport sat unusable for nearly 4 years in my locked safe at home with my old married name still on it. But in January, I ran across an unbelievable deal for a resort in Playa del Carmen, Mexico. (So good, in fact, that I contacted them after booking it asking if it was indeed true that all three of us can stay and eat there for that price.) I booked the hotel thinking I may have to cancel if flight prices didn’t come down. Then I got an alert from Google that flight prices were cut in half for a few hours back in April, so I jumped in with both feet and booked it. Even as I packed our suitcases the week before we left, I couldn’t believe it was really happening.

We landed in Mexico last Monday around 5pm and had no trouble at all getting out of the airport and to the resort. We arrived at the hotel to check in and went straight for our balcony overlooking the pool bordered by blue ocean as far as we could see. It was a long travel day and so much planning and preparation. Once we were settled, the kids wanted room service nachos, and I was happy to oblige. 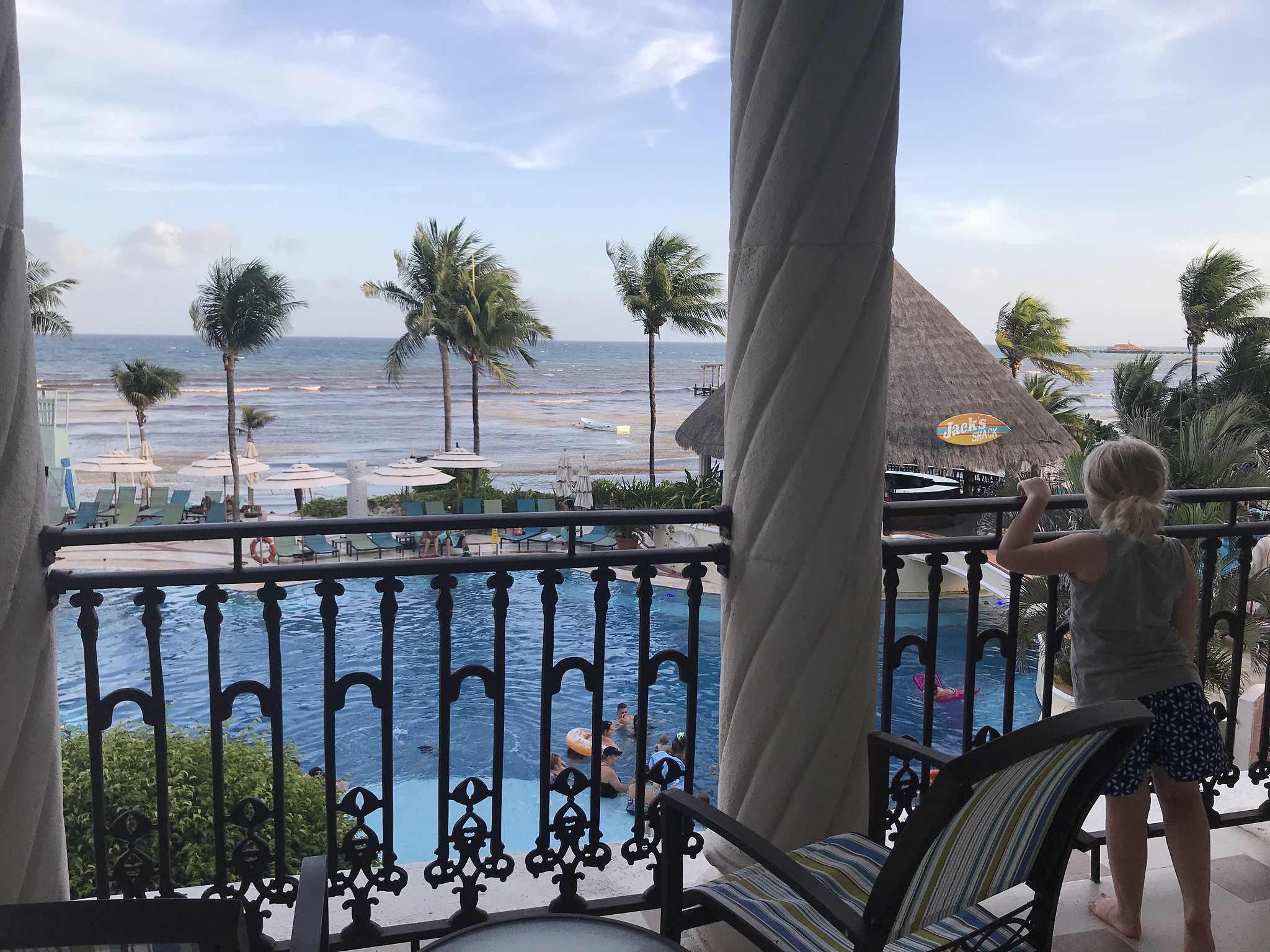 In the past few weeks, I prepped for every possible disaster scenario. I’d read numerous reports of seaweed overtaking the Yucatan and much of Quintana Roo this summer. I worried incessantly about it, but as usual, my worry was unnecessary. There was more seaweed than we usually see in Florida, yes. But the bright colors, fun food, kind people, and that special magic sauce of what it feels like to see a new place more than made up for it. We spent lazy mornings in the pool, and the hotel location lacked the isolation of a lot of Mexican resorts and made it easy to see the town itself. It was the perfect mix of relaxation and a little adventure in the unfamiliar.

I came to see firsthand on this trip that we are in such a great season with their ages and interests. They are old enough to maneuver their own luggage on and off planes and through customs lines without complaint, but they are young enough to find enjoyment in the simplest things, like tacos and ice cream and the rhythms of an unfamiliar language. The stress of traveling with them alone is that it is only me to plan and problem solve. But the reward is so much freedom. And I’m seeing how well we know each other and how close we are in this shape of three. As much as I would love someone else to share this load and help me do the necessary tasks every now and then, I can’t imagine what I would have missed in these few years if we didn’t have this time together just the three of us. Last week was a reminder of that more than ever. 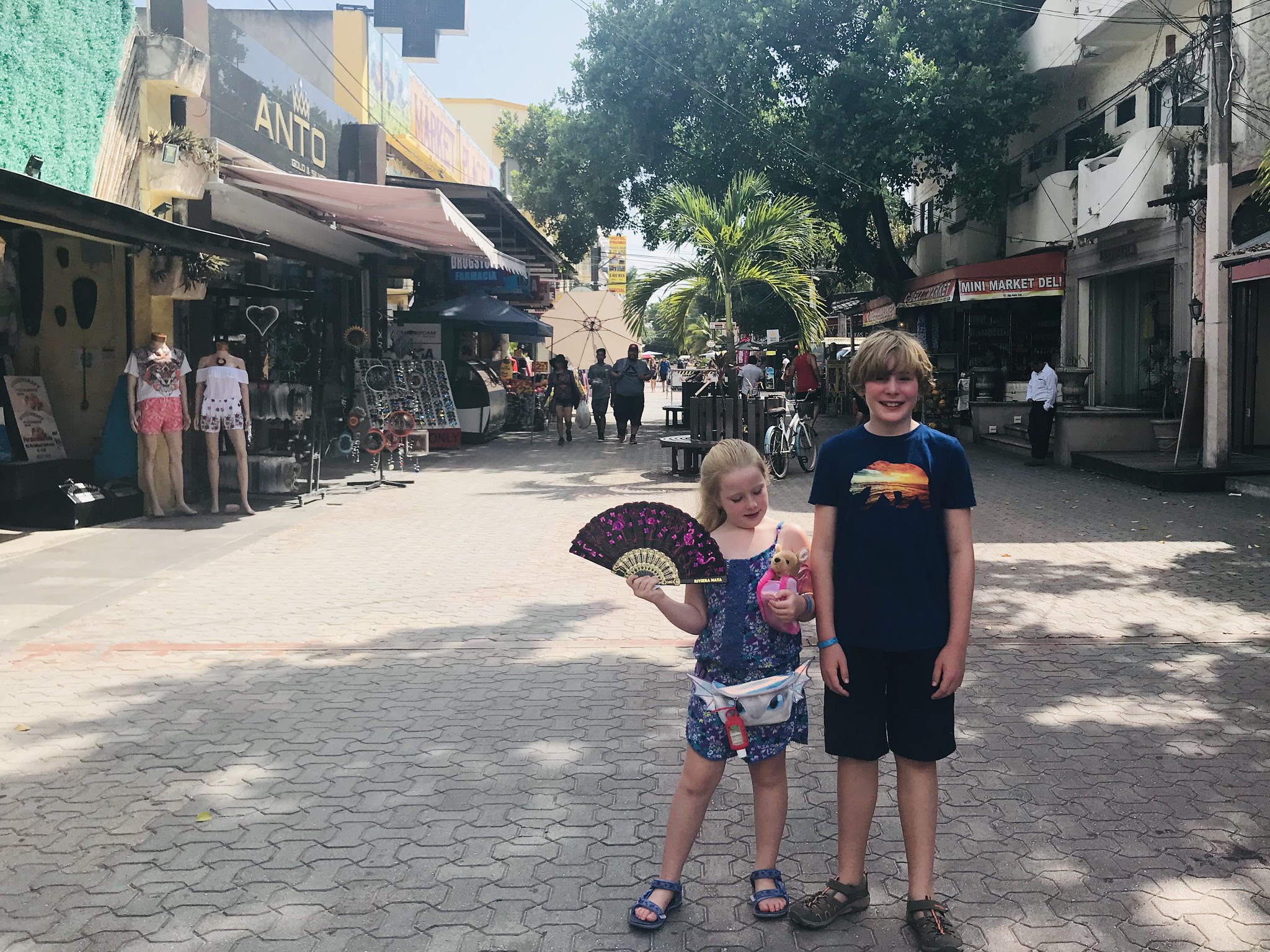 We took a day trip to swim in the cenotes, and it was definitely the highlight of the week for me. We snorkeled in a salt water lagoon and then ventured further to Cenote Pakal Nah where I didn’t get a photo that does it justice, but it was the most beautiful clear water I’ve ever seen. You could see all the way to the bottom, and we watched tiny fish give us pedicures.  It’s a gravel road that leads you there, and it feels like an oasis in the jungle. It was one of the most beautiful places I’ve ever been, and a different view of Mexico than I expected. 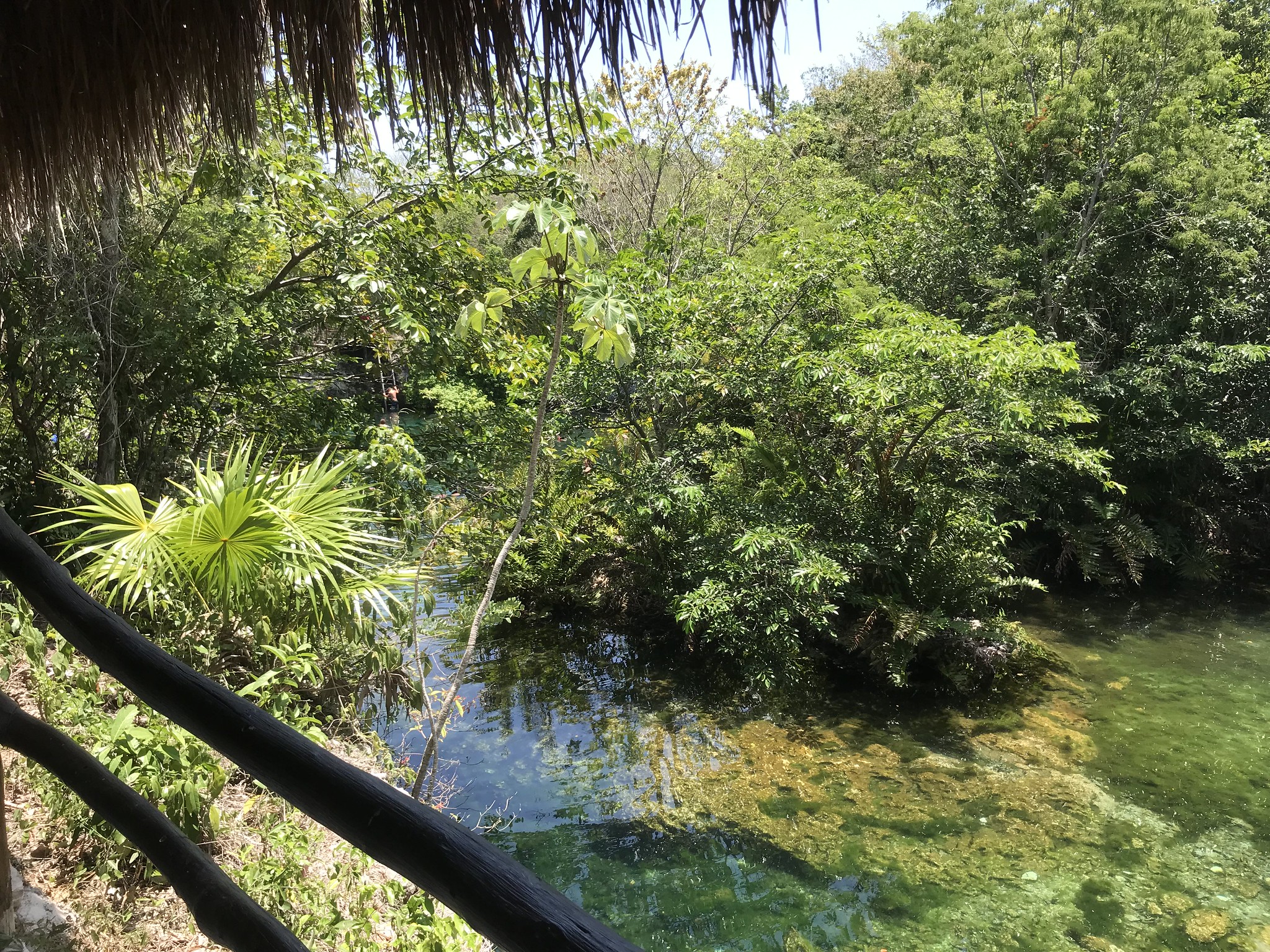 After that, we went to one last cenote in a limestone cave where the water was freezing, but we braced for it and jumped in anyway. The kids were shivering and laughing the whole time. Once we got out and dried off, we ate lunch from a buffet in a screened pavilion surrounded by Mayan jungle. Rice and beans and guacamole and fresh pico de gallo and bunuelos draining on a paper towel the way my grandmother would serve her fried apple pies. As we walked out, a stray cat crossed Norah’s path and laid down for her to pet it. I swear it seems that no matter where we are, animals always find her. Of course what followed was, “Mama, can we take him home?” 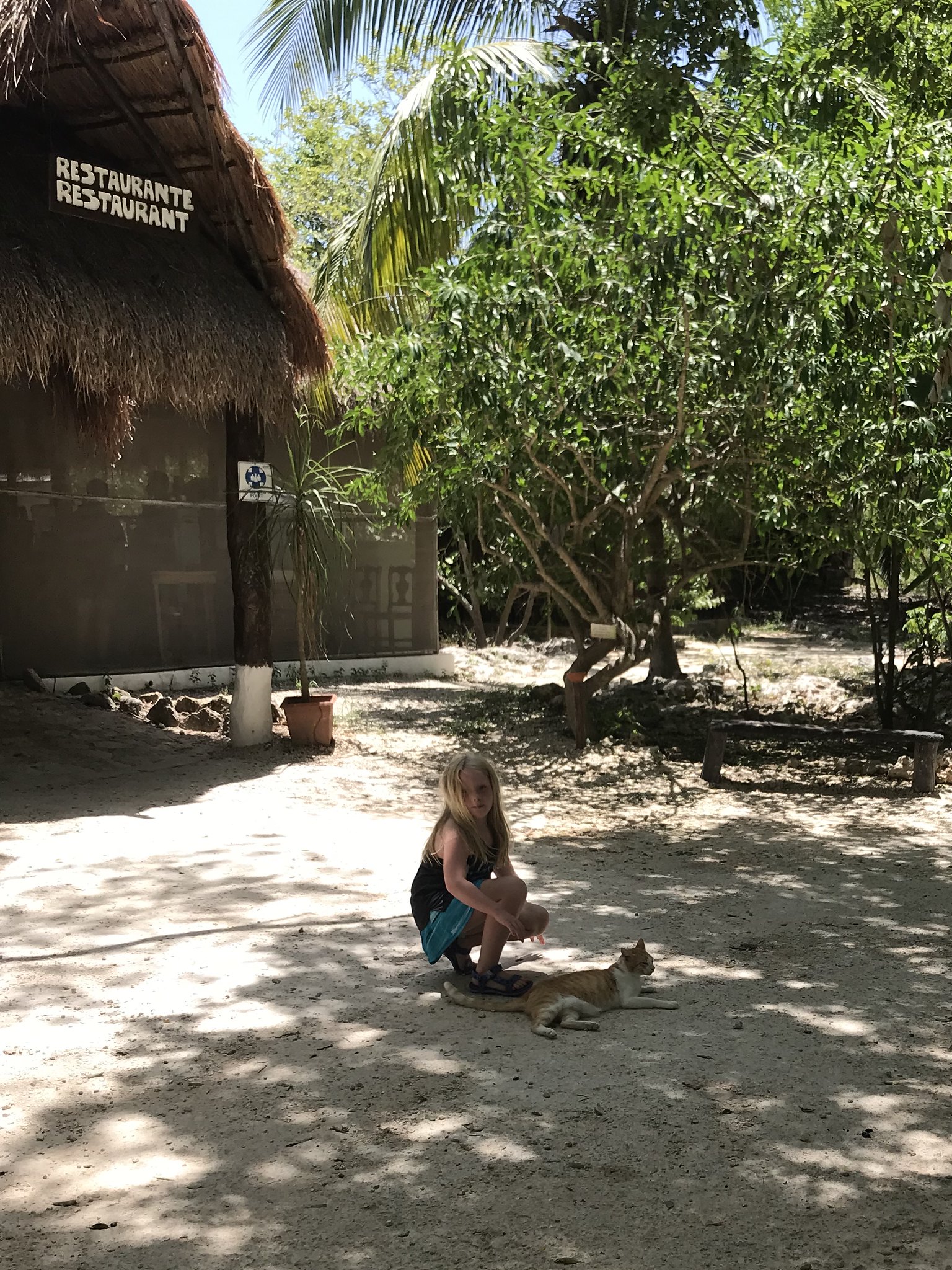 We crashed early that night, bone tired from swimming and cuddled in bed in the hotel room watching a movie until our eyelids were heavy. The rest of the trip was mostly just relaxing and exploring at our own pace and enjoying the novelty of things we cannot get at home. 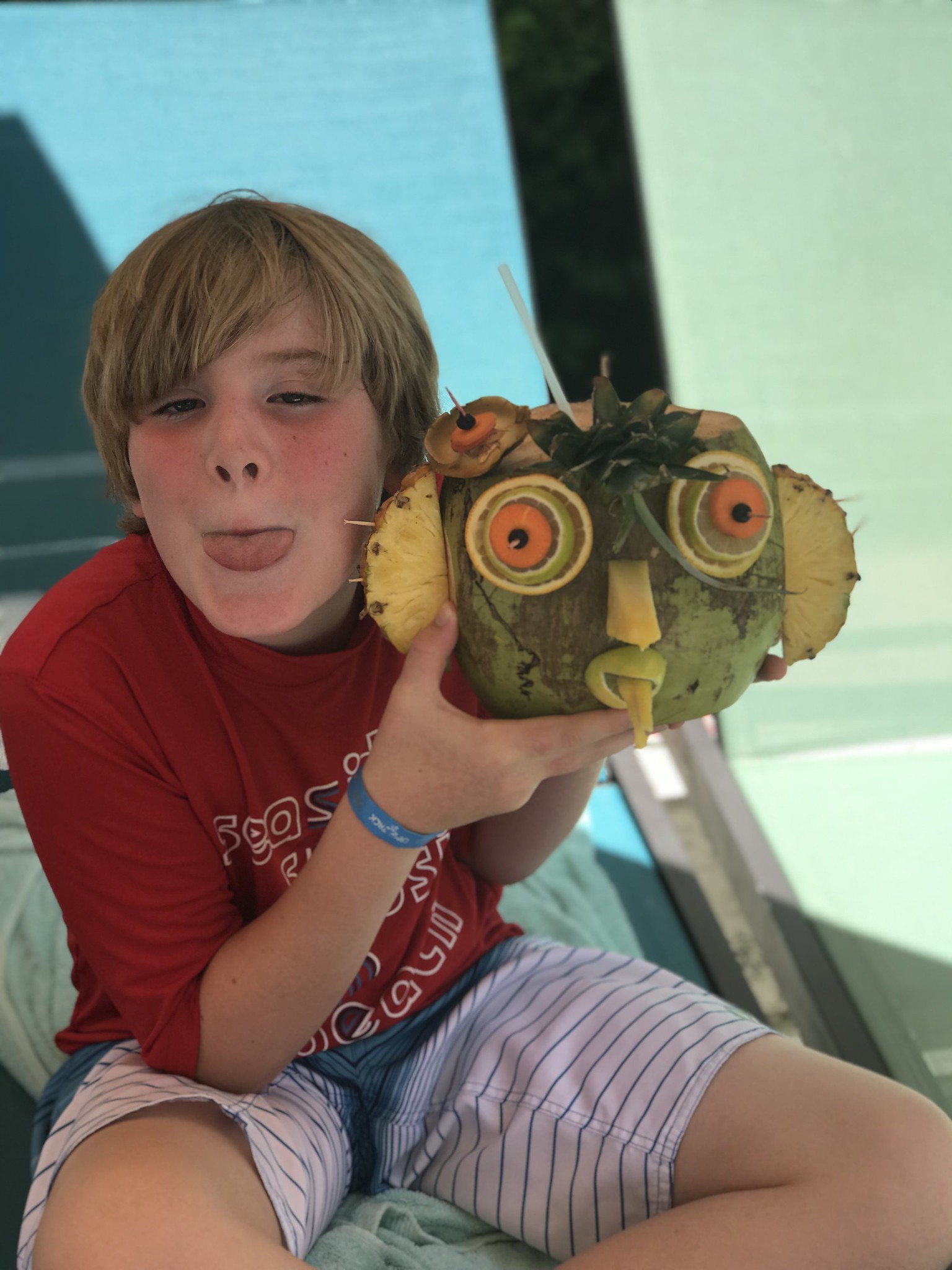 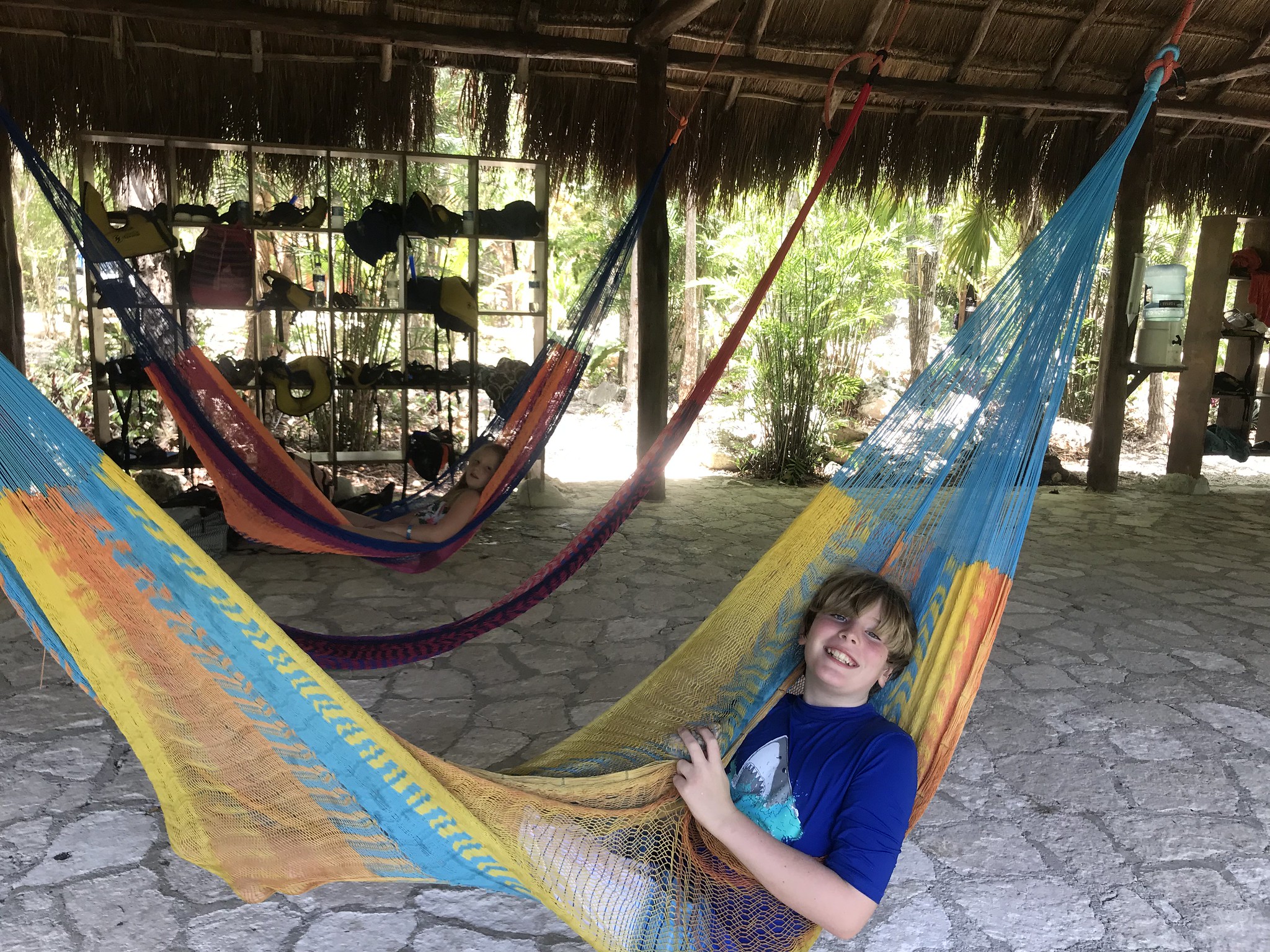 I think sometimes growth happens in ways that sneak up on you. It comes along in increments and then you do something you never would have done before and realize you have come such a long way. This trip was one of those things for me. I have done a million uncomfortable things on my own – from buying a home to making job change decisions to dealing with car repairs or negotiating with home improvement contractors. But I know with certainty that I would not have taken both kids across the ocean alone a short while ago. All of the fear stories that play in your head — what if I get sick while we are there and I am the only one to care for them? What if I get us lost? Is it safe for a woman to travel alone with kids like this? These stories still played in my head, but I just turned the volume down on them so that they didn’t drown out all of the other beauty that was there for us. 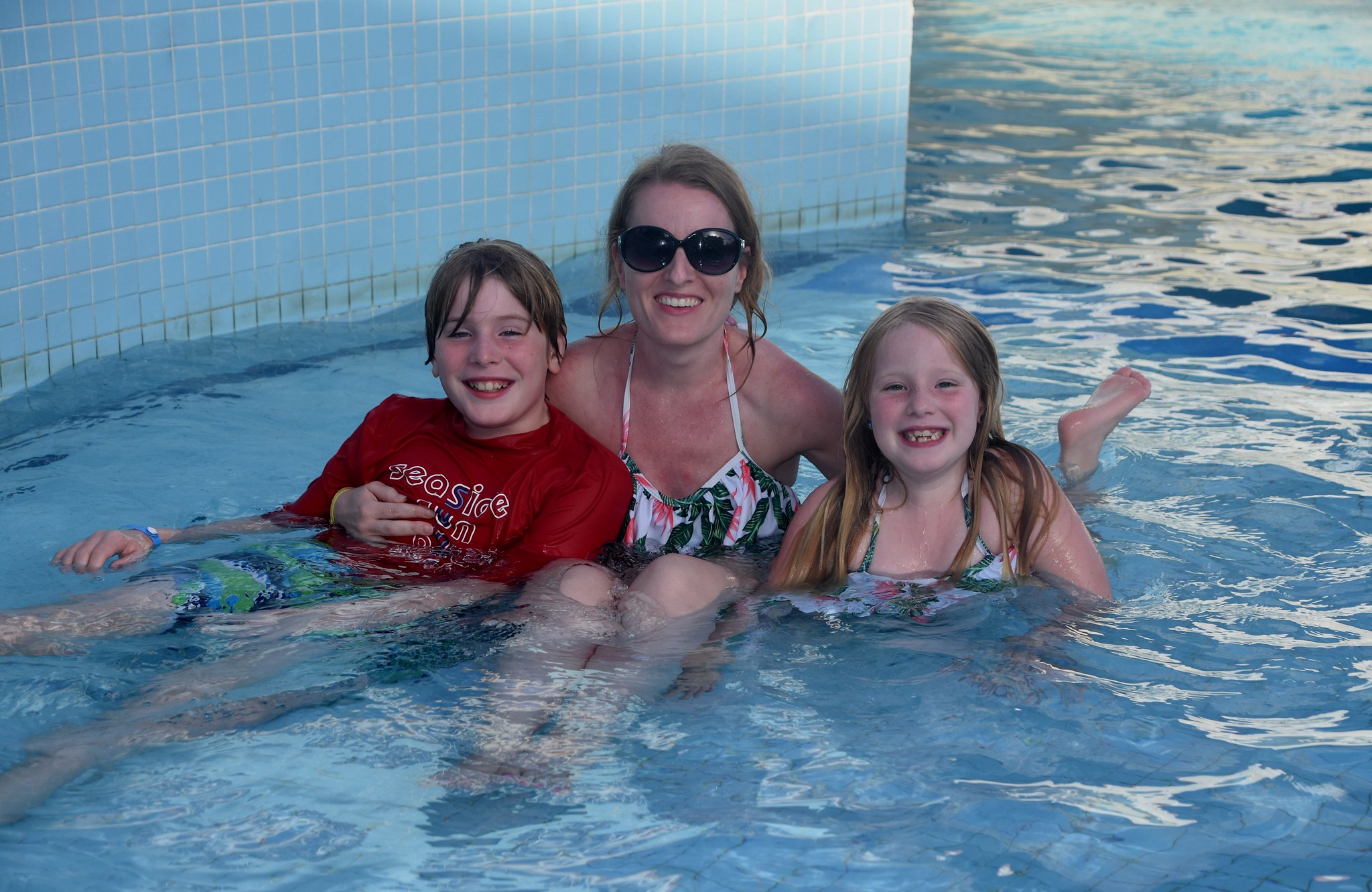 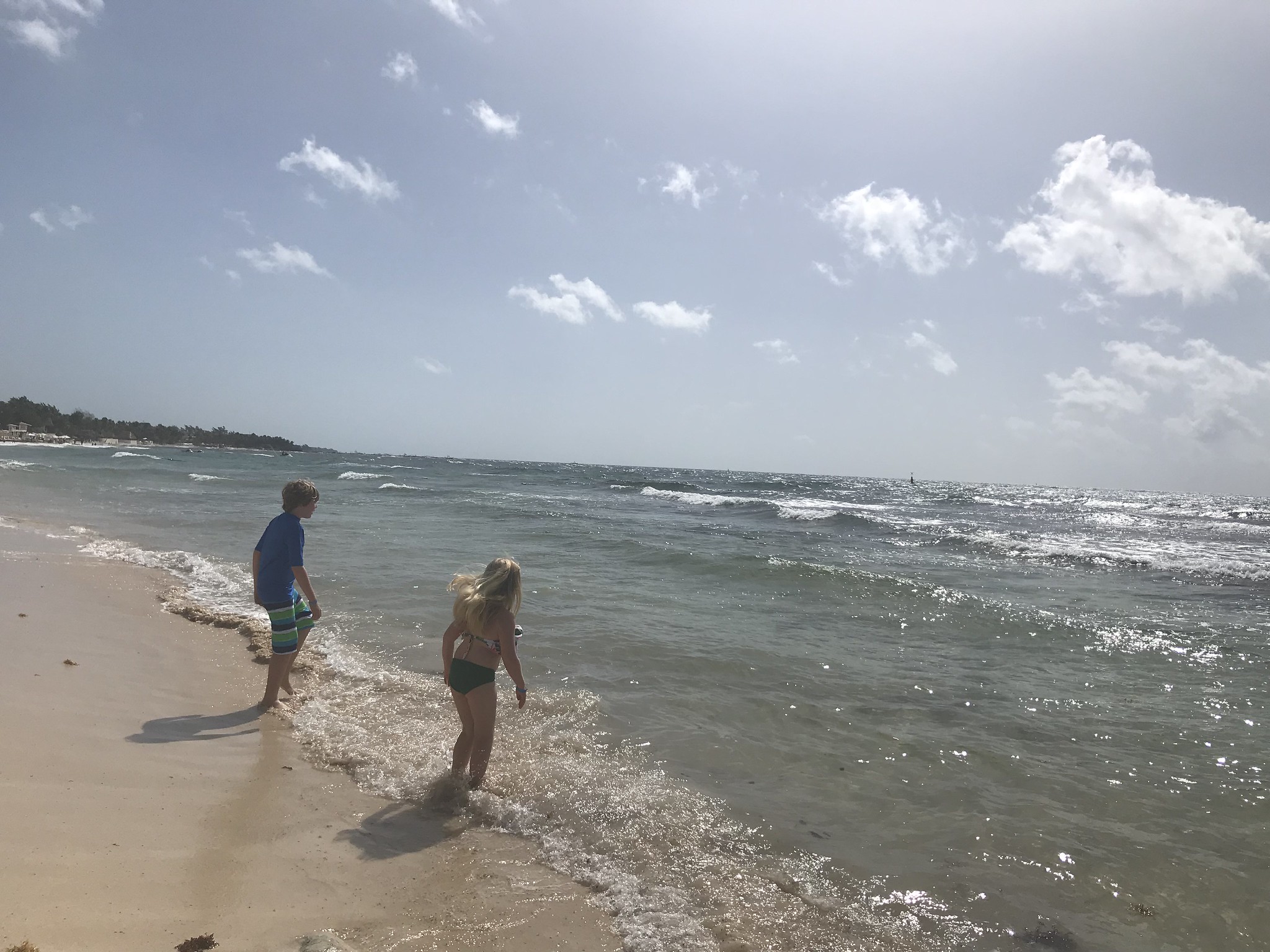 I read Jen Pastiloff’s new memoir while we were on this trip, and it was the perfect medicine. I’ve met her before through attending her workshops when she comes through Atlanta, and one journaling exercise she has us complete is “If I had no fear, I would…” I still have my journals from both times I attended the workshop. Pages and pages of what I’d do with no fear. We all have fear though. It’s there and it’s normal. Acknowledging it and allowing a little space between it and myself is the way I have learned to move past it. It’s still here and still present, but it is not all there is of me. 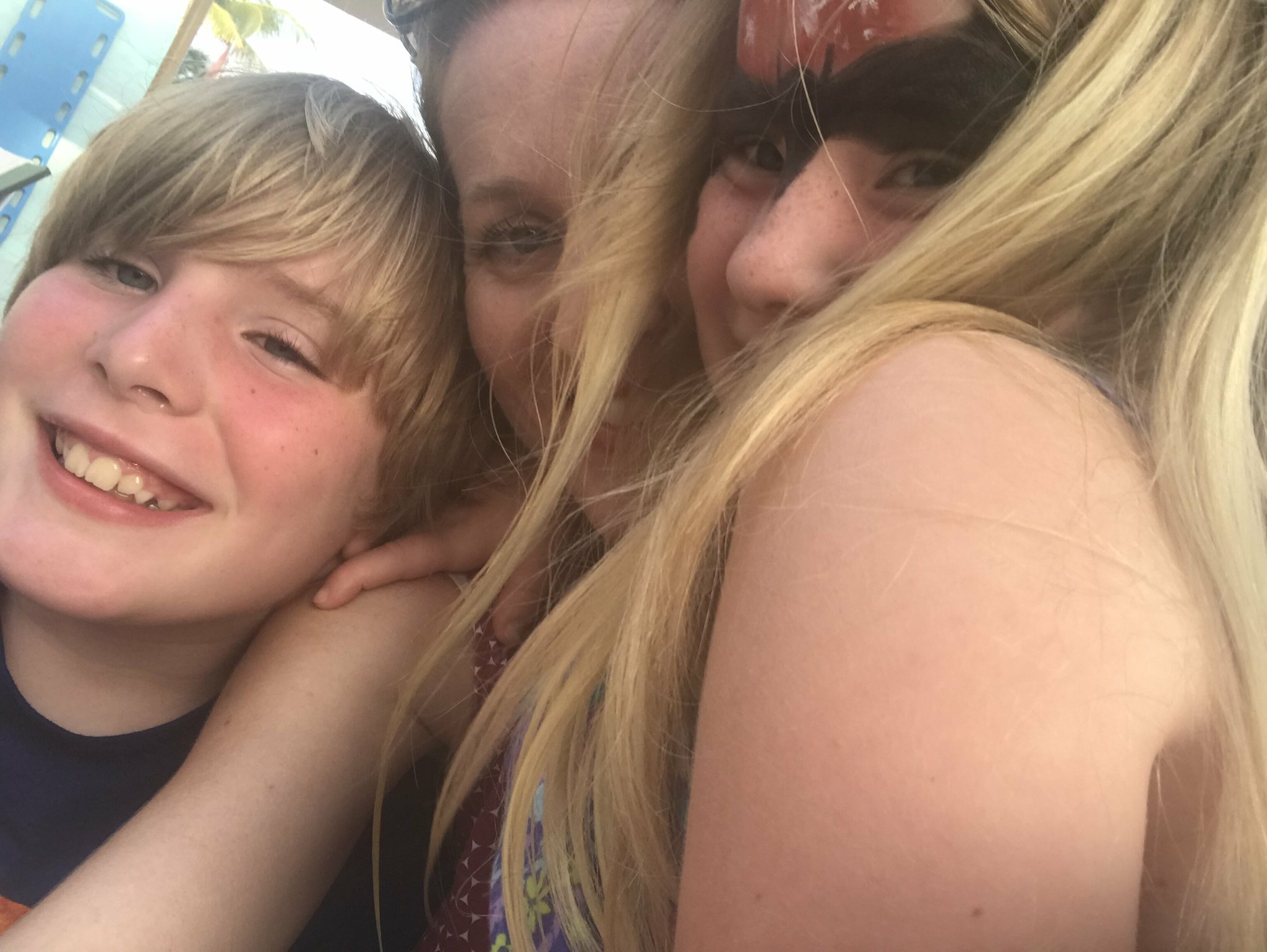 Jen also talks in her workshops about what she terms bullshit stories, the things we tell ourselves that just aren’t true but we act as though they are. She mentions this in the book, too. She tells us, “I’ve had (and I have) so many bullshit stories. It’s all part of this being human thing. The way out? Recognizing them and eradicating them so they don’t rearrange your DNA and live in your body as truth.” That distance between my fear and my real self is what allows me to eradicate them.

I think the biggest bullshit story that it eradicated for me is the one that says I am all alone in my care for these two kids. That was my biggest fear as I embarked on this trip — that it was all me and only me and what if I can’t handle it?

When we landed in Mexico, I found the longest customs line I have ever seen before. Swarms of people winding through ropes at the airport and it seemed it was hardly moving. It was hot and crowded, and I was bracing the kids for a long wait. We waited maybe 20 minutes with at least three times that much in front of us when an immigration officer walked up to me and asked how many we had and I pointed out there were three of us. He said “follow me” and I was unsure where this was going but obviously didn’t say no. He walked us out of the line and across the room to open a new checkpoint. We were through in two minutes after that. Things like that happened again and again all week. Bracing myself for the pushy sales pitches as we left the airport when instead all I got was one taxi driver asking who my transportation company was and when I told him, he pointed me in their direction to help instead of hassling me to use him instead. A driver who hardly spoke English but offered Norah a life preserver in the cenote and smiled and said, “Taxi?” as he motioned for her to hold on and swam her faster to the edge of the cold cave. So many kind people there to help and to guide.

We are never fully alone, but somehow we forget this. I know so many moments of this trip will stick with me for a long time. Colors and flavors and images and sounds that I hope will live somewhere in the depths of my memories for years and years. But I want to remember that lesson as well — Nunca solo. I am not alone. You do not have to measure your life by what it lacks. The world will rise to meet you when you have the courage to move in the direction of trust and curiosity.