There are 7 more days left in the school year, and my kids are on overdive. Something fun happens everyday – Field Day and end of the year countdowns and yearbooks and cupcakes.

Last weekend, I hosted 19 kids for Norah’s sixth birthday party, and somehow the house is still standing.  We had donuts instead of cake and invited kids over in pajamas for breakfast, sending them all home by noon. When two o’clock rolled around, my two were somehow ready to play again and headed out on foot in the neighborhood to see what was happening. 4pm found me in a rocking chair on my front porch where I could vaguely see and hear the lemonade stand to supervise but not have a heavy hand. Every now and then, I could hear Norah’s voice yell, “Come get your LEMA-LADE!” This is one of her last pronunciation errors to hang on, and I selfishly don’t want it to fade.

I have these moments where I cannot believe it is May already, almost half the year gone. Cannot believe that I have two elementary schoolers who dress themselves and have ideas and friendship dynamics of their own and see their own world as limitless and completely safe at the same time. This is a Golden Age for us, and I am not unaware of that. I am grateful for it daily. Time is the only constant and it is rolling faster than I’d like.

I was talking with a friend recently about the messes and the joys of summertime, and she explained her sentimentality with all things summer with her own son. I get it. When I look back at my own childhood, it is somehow always eternally summertime. Hours and days of no structure at all and playing in the woods with my cousins and my sister. Watermelon, popsicles, bright red tomatoes.

We have a nature trail that runs behind the homes in our neighborhood, and the kids love to walk it all the time. Jude and his gang have built a fort of sticks and limbs and an old tarp. When he described this to me over dinner one night a while ago, he told me it was “a proper fort, Mom, a real one.” I don’t ever use that word in that particular context —  proper. There are moments when you step outside the frame to see your kids evolving in their own worlds. He lead me over there a couple of weeks ago to show it to me, and he’s right. It’s a proper fort, complete with an entrance and stones to line its edge.

Two weekends ago, they invited friends over for Sunday morning pancakes, and we went walking along the trail after breakfast. We got to a clearing lined on one side with honeysuckles, and the smell took me right back to something like 1989 when I’d run along the path between my house and my grandparents. I stopped and showed them how to pluck and string a Honeysuckle to get a drop of nectar on your tongue. They were enthralled – all four of them – and stood along the edge of the vines for a long time, plucking and stringing for that tiny drop. 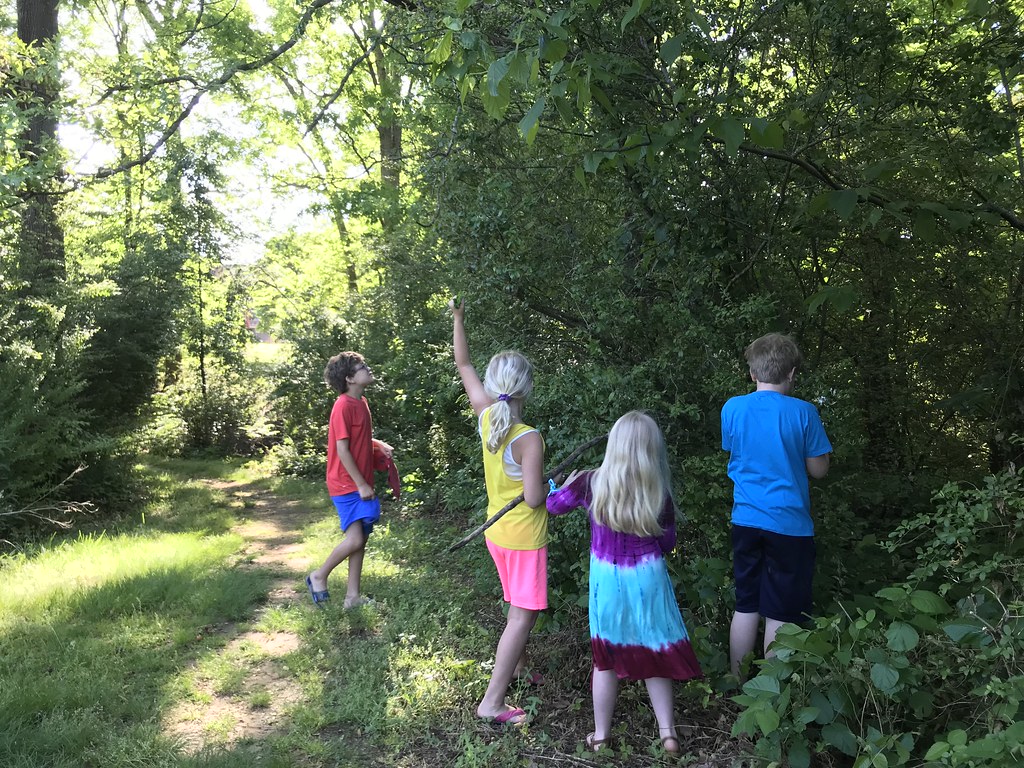 My kids have a childhood so very different from my own in many ways. They have Kindles and know what a smartphone is and see a globe much smaller than what I saw. We are settled in the suburbs with a small green square of grass and only three of us in this house. But there are ways it echos my own childhood, too. Lemonade stands and long summer days and dirt under your fingernails when you finally come back inside after hours of play. Fort building and honeysuckle eating and other kids to explore with.

It feels good to stand here on the outside and watch them build a world of their own. And I can see from this angle how deeply colored the aisles of memory are, knowing one day they will walk past a patch of Honeysuckle and be taken right back to the place we are now. This is my middle and their beginning, and it is such a sweet spot when I look through that lens to see the rolling hands of time as something that both pushes us from place to place and sometimes dissolves into nothing. Some things are eternal.