We did it. We turned a fresh new page this week. We began the school year with not one but two kids on the bus. I packed two lunches the night before and followed four little legs to the bus stop yesterday morning. 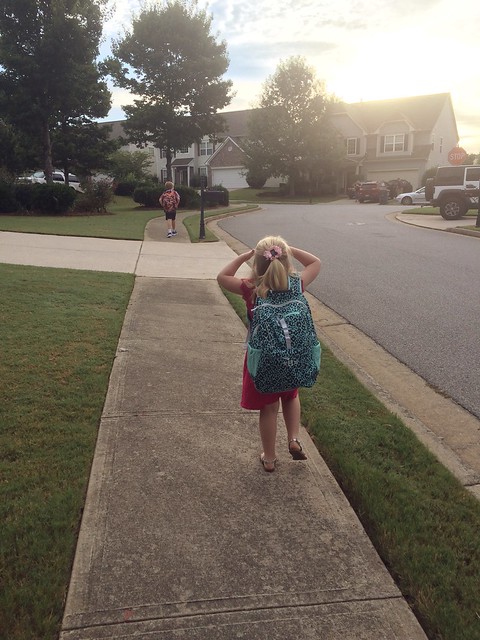 I can’t believe this month somehow marks the third school year we are beginning in this house and in this family of three. Right now, in this moment, I feel like I have never known it any other way but this. The three of us doing the rhythms we know well, season after season. Only what has changed is that I feel steadier and they seem older, and somehow it feels more like us everyday.

They got off the bus yesterday afternoon reporting a fun first day, but she was more tired than I’ve ever seen her – pink cheeked and bleary-eyed and overwhelmed and exhausted. I forgot how intense the first few weeks of this kindergarten transition are. We kept it easy and predictable yesterday afternoon. They snacked on strawberries and played with neighbors. Later last night, I made spaghetti and meatballs by their request and watched them slurp it as they reported details of the day – whom they sat next to at lunch, what they glued and painted, where they played at recess. We washed the day away with baths and showers and then settled in together on the couch with a cartoon before bedtime reading. Nothing is special about these seconds except that everything is. I forgot how much comfort can come from home and routines sometimes. My academic year begins in another week or two, and I feel beyond lucky that I have this time to share with them and lay some groundwork for the everyday net that holds us in the busy fall days coming up.

I kissed them off this morning for day two and walked a couple miles around the neighborhood before I came in for more coffee and the task of finishing up some freelance. The day ticked by slowly, and you can’t help but watch the clock and wonder what they’re doing now as they make their way through their own day in their own space without you. I don’t remember who said motherhood is like forever having a piece of your own heart just walking around outside of your body, but it feels that way for certain. Some days more than others.

And now they’ve left to their dad’s after school today, and I’ve had hours alone in my house after two weeks of kid noise and constant chatter. I don’t know if it’s the older I get or the more me I become, but the quiet stillness is always what it takes now for me to come back to myself, to set new intentions and refocus and fill the tank.  I ate dinner alone and soaked in a hot tub even though it was still daylight out – a ritual that always feels like an indulgence. I listened to music (Gregory Alan Isakov’s Shades of Blue which I never tire of) until the water became lukewarm, and as I dried off, I was thinking about how many hours I’ve spent in this house alone (countless) and how familiar it all is to me. Meaning how familiar the silence and the sound of my own thoughts has become. It’s a sound and a feeling I know better than anything else in my life now. My own self.

I feel like somehow there are still depths that I haven’t seen though. Does it always feel that way? I don’t know. The human soul is layers upon layers and then experiences pile on top, and here we are – left to swim the deep a million times over and feel our way out if we’re brave enough.

I think I’ve got more swimming to do in that regard, more to feel and explore, and I’m so grateful for the time and space and curiosity to do it. The start of a new academic year always fills me up with the best kind of nervousness and anticipation. There’s so much out there, just beyond the shore of where I am now. I’m stretching and reaching to see it.