I’ve thought a few times about how I needed to sit down to write here, but it is always in passing. When we are in the car and headed somewhere, when I’m chasing them at the pool, stirring something on the stove. Summer is a different kind of busy.

I went on a quick beach trip last week with my mom and my sister – a stretch of coastal highway I have vacationed at a million times before. Every year, it looks different than the year before. New buildings everywhere you look, but a few staples remaining the same. And the ocean never changes, which is why it’s always so soothing to us, I think. Big and vast, inhale and exhale. Farther than you can see. 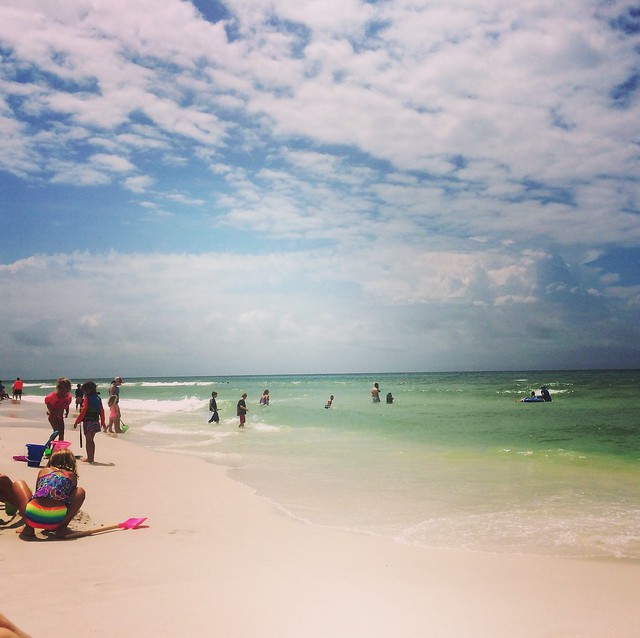 It’s weird how much things change, even when parts of them stay the same. I am late to the party on this film, but I finally watched Boyhood while the kids were away as well.  You’ve likely heard by now, but it was filmed with the same actors over a period of 12 years.  The director apparently had a general idea that he wanted to capture one boy’s coming of age from a first grader to a college freshman, and he had the ending shot in mind. But the pieces in between were written as they went along, meeting once a year to review previous footage and film new pieces. All of these moments that are ordinary childhood milestones – birthdays and classrooms and graduations and vacations – seem the opposite of ordinary when you see them presented on the screen like this as part of one boy’s life.

I think part of the reason the movie is so extraordinary is that it forces the audience to take the long view, so to speak. How seldom we do that. It’s human nature to look around at wherever you are and see it as permanent and immovable. Sometimes you look in the rearview mirror and see major moments that unfolded change for you, and sometimes it just creeps up more subtly. But life is changing all the time.

I was revisiting some Pema Chodron last night before bed, The Places that Scare You this time, and a few passages I’d underlined before caught my eye with new meaning now … “Everything is in process. Everything — every tree, every blade of grass, all the animals, insects, human beings, buildings, the animate and the inanimate — is always changing moment to moment. […] Our natural tendency is to seek security. We believe we can find it. We cling to a fixed idea of who we are, and it cripples us. Nothing and no one is fixed.”

I see what she means when she tells us not to look at ourselves as set and secure and permanently what we are right now, and I’m getting better at that these past few years as changes have forced me to grow and move and transform to something else. But I’m realizing what I need to work on is the realization that others are not fixed either. Who someone was yesterday is not who they are today, and tomorrow will reveal something else. It’s so hard to just leave room to let life move and change around you without gripping tighter to whatever your current perception is.

Yesterday was summer solstice, but the weather was not typical for late June in Georgia. The longest day of the year was clouded and dim and hardly 80 degrees. I woke up this morning to more steady rain outside my window. We end up with a few tomatoes everyday, brought in from the patio and lined up on the windowsill side by side. There’s so much that is good and fresh and lazy and easy about summer. So much time to just be and just rest. But it teaches us patience a little as well. You wait on peaches to ripen until they are exactly where you want them to be before you indulge. You tend and water and pluck and prune and know that your efforts will pay off when it’s time.

I think the thing about getting older is that, even as you sink your heels into wherever you are right now, you know there are other seasons around the corner. You can feel them tugging a little just ahead, reminding you to find what’s good right now because it’s always unfolding to something else.