A few days ago, my son came home with a paper invitation in his backpack that explained his artwork was featured in an exhibition at a local church’s annual Festival of the Arts. He’s in first grade, so I’ve only had a school-aged kid for a couple of years, but I have already figured out that it’s really impossible to tell with some of these functions if they are a big deal, so to speak, or if you will rearrange your schedule and drag kids out for something they would’ve hardly missed. There was no teacher email or mention on this one either, but I stuck it on the fridge and figured we’d go.

Wednesday rolled around, and it’s speech therapy after school which makes for a long day anyhow. Plus it’s the end of the month when my finances are always extraordinarily tight, so I didn’t want to splurge on dinner out when we had food at home. We race home, I make a quick dinner, and we turn around to race back out in the same general direction we came from. My mom was at my house the day before and saw the invitation on my fridge, so my parents wanted to check it out and were a little ahead of us and already there. She texted that there were A LOT of people there, and she wasn’t kidding. We arrived and took a while to find parking and shuffled in a line with everyone else to see the student exhibitions with work from 21 different elementary schools in the county – plus middle and high schools. There was visual art and ceramics and fashion design and sculpture. It was pretty amazing. And amazingly crowded. But we did spot his work along the wall with the others. 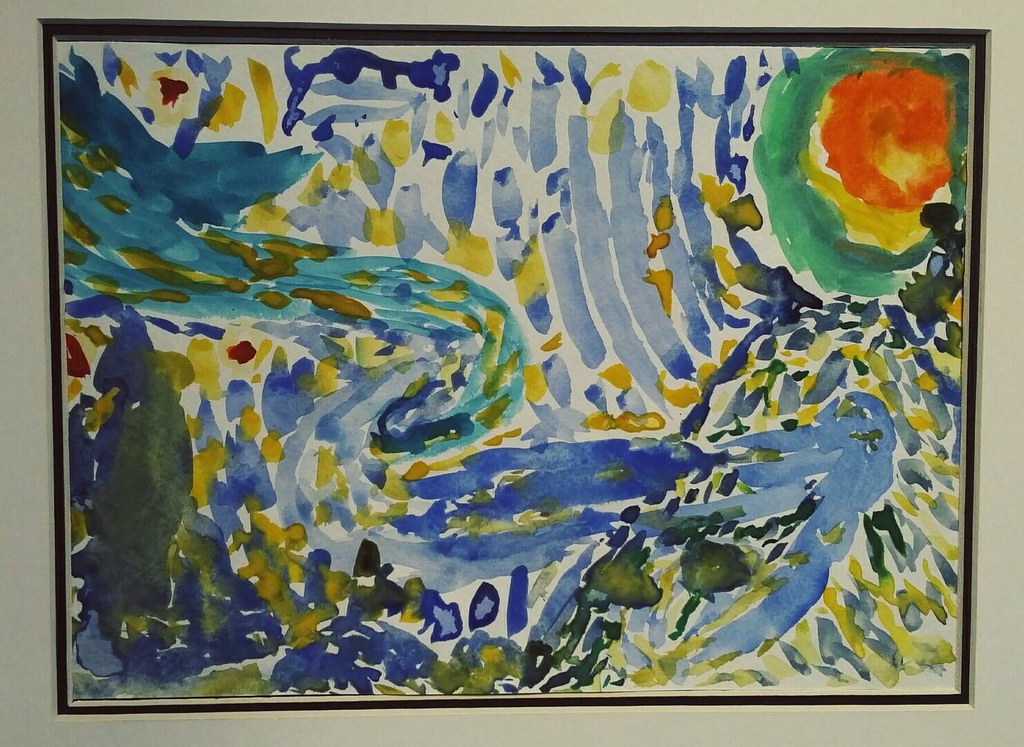 At 6:45, they shuffled everyone upstairs to the sanctuary to list award winners, and they read a long list of 20 Honorable Mentions for elementary schools. They didn’t say his name, which did not really surprise me given the volume of art and participants, and he seemed a little disappointed, so I was whispering that it was an honor just to be included and don’t forget that your teacher chose only you for this event. Only you.

Then they listed winners for elementary school, and when they said his name for third place, both he and I perked up in surprise! I have his art cluttering my fridge and my coffee table and the back seat of my car and nearly every surface in my house, but that is mostly just because he’s my own kid and he loves to draw and paint and create. I never compare his work with others. It is such a fun experience and a rare moment of genuine surprise when you hear your kid’s name called and see them recognized in such a big way. He was competing alongside kids years older than him from 21 area schools, and it was such a special moment of pride for him. I’ll never forget the look on his face.

I emailed his art teacher early the next morning to say thank you, and she explained that she “knew it was special when she saw him painting it.” And Jude’s only mention of it weeks ago was to tell me that they were studying Van Gogh, that he kept working, working, working on it when all the other kids were done, and that his art teacher let him work slowly and take a long time to finish. (How seldom we do that, right? Such a reminder to have patience and let the canvas take shape — which is one big metaphor for raising kids and for watching your own life take shape, too.)

I’ve written a lot lately about being exhausted and pulled to my limits, which I am. The long days are the longest. But the good days feel like such a welcome break in the monotony sometimes. Wednesday was a really great moment.

As any divorced parent will tell you though, these moments do not ever look like what you’d once expected them to.

Jude’s dad was on the other side of the country, so neither of us told him when the initial invitation came home as there was no point. As we were walking out the door though, I think it dawned on Jude that this was a big deal and dad wasn’t able to see it, so he sent a hurried text message to his step-mom detailing the time and location. She dropped whatever it was that she was doing and hurried there, baby in tow.

I let him contact her without asking otherwise. We slid over in the crowded pew for her to have a place to sit. My family flagged her down in the crowded sanctuary so that she would feel less alone. We waved her off at the end of the event so that she felt included. I say all of this not to say look at me, I am amazing. I am not. We are not best friends. I say this to say that after months and months of practice, it really is not impossible to look at someone like a human being.

I wrote a little last fall about seeing her in a different light and feeling commonality and even sympathy for her in many ways. I do. And yet the hardest part of this is that, though she and I have stepped up to drop the bitterness and rise to a higher calling for the sake of my kids, there are bumps in the road beyond the two of us. My parents and I will sit down at a soccer game with folding chairs near my ex so that kids see us as one unit, and my children’s father and his own parents will stand up, fold theirs, and move to the other side of the field to make it clear we cannot do that. I will greet with a hello and get nothing back. When we are passing bags of clothing back and forth between households, I reach my hand out, but it gets placed on the ground at my feet though I am standing 3 feet in front of him and an outstretched arm would be the most respectful and least awkward way to do this. There is so much more I could say, but I will end there.

I worry a lot about how my kids absorb this as they are growing old enough to watch and observe with their own thoughts. I don’t write a lot about that dynamic here because it feels weird to do so, and I always write with the intention of revealing my own heart, but sometimes someone else’s actions and the effects on your own heart are so tangled that you cannot unwind them to talk about one without the other. I know so many readers here are coming from the same story, and I’m being transparent for the both of us. If you are in it too, I see you and I feel your sadness. If you have emerged to the other side where you are treated like a real person and a human being and not a ghost, please tell me how to get there.

Sometimes I think it’s just that women are capable of seeing complexity in a situation and rolling with it in all its gray areas so that we can put or children first. Sometimes I think that it’s because I took the time to clean up my own heart after my divorce so I can make eye contact and say hello and sit in a chair near them and it doesn’t hurt like it did at first. I know how it was in the beginning when I couldn’t look at them without tears in my eyes, but I don’t feel that anymore now that we are 2 years out and I did the hard work of cleaning up the mess inside my own self with time and reflection. If you cannot make eye contact or pass a clothing bag with an outstretched hand or answer a hello, is your heart anything but messy? Sometimes I wonder if I can be my own self without bitterness and shame and anger because I was not the one who stepped out of the marriage before it imploded. Is it actually easier in the long run when you are the one left behind in the beginning? That seems so ridiculous and counterintuitive to say, but there are ways I think it is true. I have nothing to hide or explain.

And in a literal sense, I know if I never once wrote the first word here, it would be very different. I have laid out all my fears and my sadness and my hurt and my confusion in this space, and it has only ever been my own perspective and my own heart. I have always said that. Many, many times, I have been told to be quiet and stop writing anyway, and yet I never did. This space has evolved to something else entirely where I have written about a million more things but always with the simple intention to tell the truth and lay it all bare as I feel it inside – whatever it may be.

I am revisiting some Marianne Williamson this week, and she says, “Women are still in emotional bondage as long as we need to worry that we might have to make a choice between being heard and being loved.” That passage slays me because I can glance back at every moment in my life when I felt that being heard did not equal being loved and feel how painfully that suffocates you. I think I finally realized that love is not real love anyway if it comes with the condition that you cannot be heard, so here I am still writing. And here I am still loving – even those who are hard to love. I can know that someone made choices I would not have made and maybe still has some mess left to work through, but my only ability to change anything at all is to be responsible for my own actions – whether that means making room on a church pew, recognizing my son’s desire to reach out for love from his other household, or looking someone in the eye to say hello. I think I will have to wait on the hand of time to soften all the rest, and if it doesn’t, it is still softening me. Maybe that is the other side I am meant to arrive at — not some sitcom reality where divorced parents have dinner together with their kids.

It’s our small daily choices that paint the whole canvas in the end. And though my kids don’t fully understand everything now when they see someone move a folding chair at a soccer game or decline a birthday party invitation or leave a hello hanging in the air between us without an answer, I know that they will look back and see that if nothing else, mom stayed open and soft and honest and real.

35 thoughts on “the time it takes to paint the canvas”