My kids slept until past 8am these past three days, which is beyond rare.  Even in the slow pace of summer, that doesn’t happen much. They both made their way to my bed in the middle of the night last night, so I woke up under a pile of heavy heads and limbs with my own back a little sore. The outright neediness of baby and toddler days has passed, but it sometimes doesn’t feel all that different now. Still always someone or something needing something from me. Kids or the dog or the job or the house. Or my own self which is the last thing I have time for in the frenzy of regular life.

Neighbor kids were over two weeks ago playing hide and seek, and my living room curtain rod was a casualty. One bracket came down, and the wall left behind seems a little crumbly where it was drilled in before, so it’s not a straight-forward fix. Add to that my apprehension on using a drill, and it has been abandoned for the past two weeks, along with a large box of self-assemble furniture sitting in my dining room for a full month now and at least three large piles of clean laundry upstairs that need to be put away.

Do you ever feel like the piles of unattended tasks in your life somehow take up real estate in your brain so that there is no fresh air there to move around? I prioritize what is first, squeeze by and turn sideways among all the lists and piles, glance the other way, and do all I can to function despite the unfinished mess. But sometimes it just reaches a point where I cannot do it anymore. As my students say, I can’t. [As one complete sentence.] I just can’t. I can’t do much of anything. It takes a lot for my brain to reach overflow status, but when it does, I’m done.

I think motherhood is a challenge because so much of our work is invisible to everyone else — the meals that appear magically on the table 3 times a day and the laundry that is cleaned and the school schedules that are recorded and the million other minutiae that are pulled together somehow. But when you are the only adult in the house, you can feel even more invisible somehow. Invisible to your own self, too. Treading water all the time.

Last week I tried and failed to set up my cable television myself. Then last night, I tried and failed to put the furniture together myself.  Then I drove 2 kids at 8pm to purchase heavy duty Command strips and pray they’d hold up my curtains because I had also tried and failed to drill the bracket back in the wall, and there is only so long I can stare at the fallen curtain before losing my mind when what sits in front of it is a cable box that doesn’t work and what sits above it is a water stain that I should have attended to weeks ago but haven’t.

I had a ten minute span of time this morning as I finished my coffee where I thought my curtain solution would hold and felt mildly successful, but then it fell. And I consequently cried in the shower for a good 30 minutes while hiding from my kids. The little things feel big sometimes. And I think everyone always says just ask for help, but I do that in nice or subtle ways that no one hears. Or maybe they do, and they have their own agenda to tend to which is entirely understandable.  But whatever the reason, it just sinks in sometimes in that particularly heavy way: you are alone. entirely. on your own. man up. figure it out.

I’m so exhausted from figuring it out. I feel like I am out of creative solutions, and I’m spent. Done.

The truth is I’m not done, of course. The truth is that I have felt this way a million times before, and I just keep moving and the wheels keep turning, and it works out. Every time and always. Frederick Buchner says, “Life is grace. Sleep is forgiveness. The night absolves. Darkness wipes the slate clean, not spotless to be sure, but clean enough for another day’s chalking.” Grace always comes along last. Just a little last bit, just a little more room to breathe deeply and say thanks for what is here and what shows up for me. Then tomorrow is new. 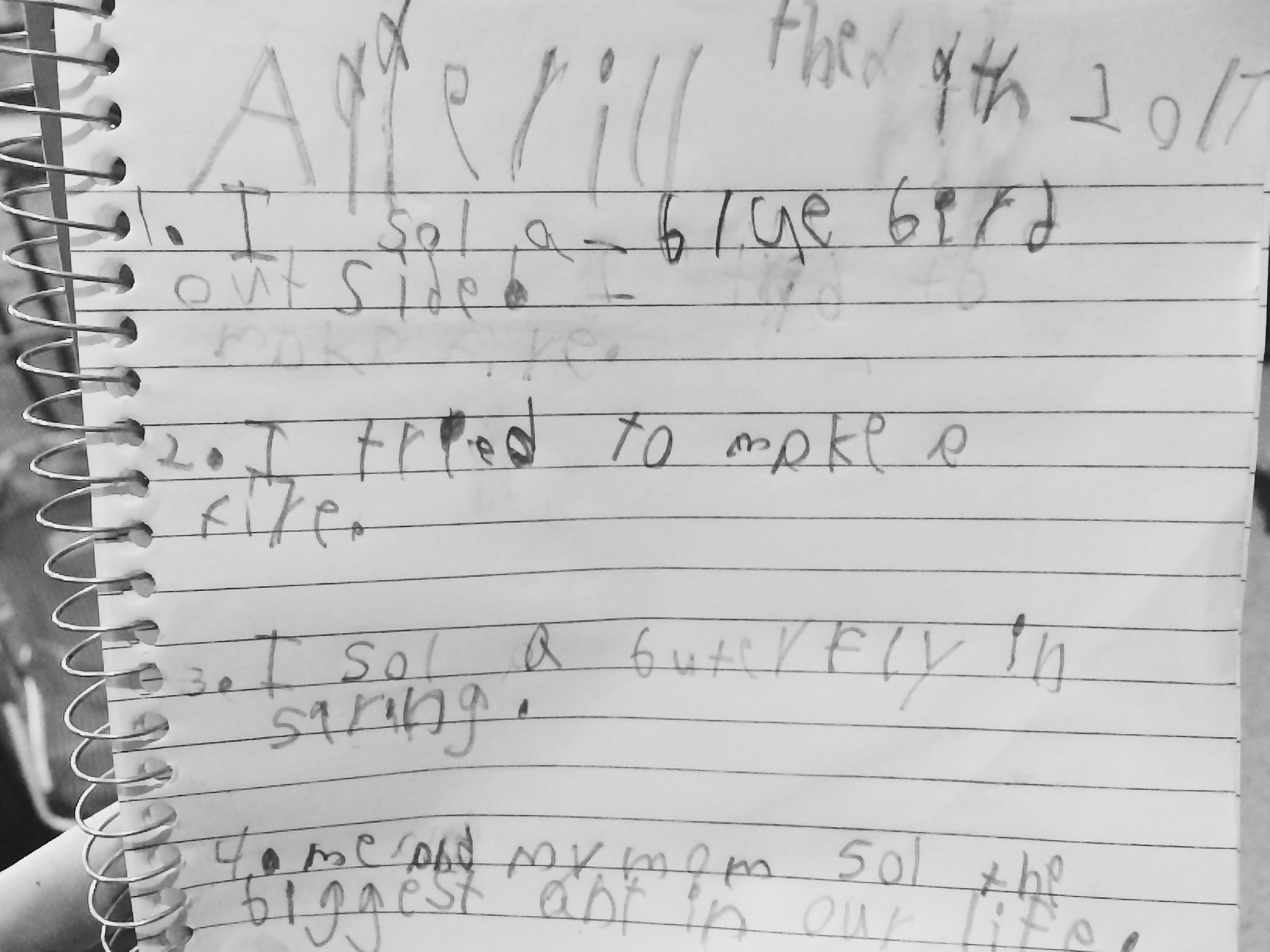 We went to the park this morning. I was knee-deep in laundry and wanting to finish it, but a neighbor knocked at our door with a last minute invite, and both kids started jumping. So I dropped the laundry [again] and said let’s go. Jude took a notebook for his “field notes” and numbered his observations with his first grade penciled lettering. Seeing a blue bird, rubbing two sticks together to try and make fire, watching “a butterfly in spring,” and seeing a large ant.

He takes so much solace in these observations, like our time outside only really happens if these things are recorded for him to see and feel. I get that. Writing does that for all of us, I think. In so many ways, that is exactly what I do here – write my observations and experiences as they happen, not always trying to do anything with them, just writing them here to see them staring back at me and know that they aren’t invisible.

Sometimes I do that to reflect on what’s good so I can say yes, remember when? And sometimes I do that with the hard stuff, too. So when it gets better, or when it comes around again, I can say see, hear that? You’ve been there before and you did it. Just hang on; grace always comes last.