It’s been a week or so since I sat down to write, and though I hate the term “writer’s block,” that is what it feels like a little this weekend. But I make myself come to this space regardless of what I have to say. Most of the time, the biggest truths come along between the written lines anyhow.

We are wrapping up the summer with only 4 days left until school begins for Jude. We’ve  been swimming with cousins and playing with neighbors and staying in our pajamas for hours after waking up. I don’t feel ready for the start of the school year, but it’s almost here anyway.

Jude spent hours yesterday chasing butterflies while we were playing with family. I joke that he is the Butterfly Whisperer. He will quietly sneak up behind them as they pause on a flower and gently grab their wings. It takes so much concentration, and then he’s proud of his accomplishment. 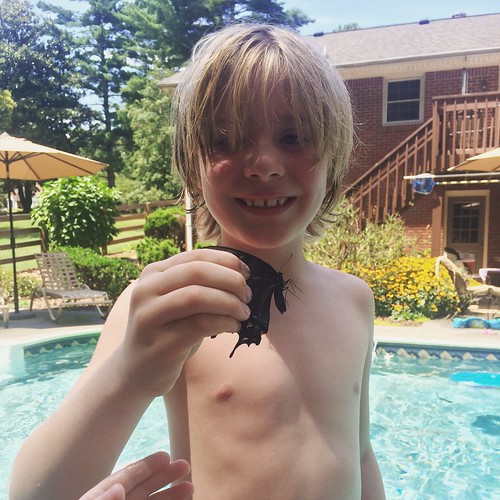 We played with them a minute and watched them flutter in a Mason jar for a few hours and then had a butterfly release on the back patio just before dinner. Both of my kids are growing so fast, just like every mom says, but I am astounded at how much they comprehend. How much they observe and the conversations they have with me, the ways we understand each other and know each other well. Motherhood is not easy, but they are getting easier, no doubt. I’m grateful we are hitting our stride.

There are so many things swirling in my head that I haven’t mentioned here because I am not sure how to say them gracefully or how much to say. I don’t talk much about my former life circumstances because it feels so, so far away. Like another lifetime. But that little TimeHop screen on my phone shocks me back to reality sometimes. Two years ago this summer, I was cooking out with friends for the Fourth of July in my married home without so much as a hiccup on the horizon. Two little years ago, we vacationed in Mexico together. But I look at those photos now, and only my children even look familiar. I have changed a million times over, and it looks like a stranger next to me.

It has changed somehow. Instead of the overwhelming shock and heartbreak I felt a year ago, it just feels like some weird sense of disconnect. Like that could not really have been my life before. I hardly remember it somehow.

He is welcoming another child in two months. The kids told me, nonchalantly, back in March as I stirred dinner on the stove one Sunday evening in the late daylight. I expected as much, but the speed at which it all has happened is still enough to make my head spin sometimes. Two little years after we were vacationing in Mexico together without a hiccup on the horizon, and I am writing this sentence on a couch in my own home with my own life and dreams unfolding as I watch my two gain independence. And he is likely in a baby aisle somewhere surveying pacifiers and buying breast pumps and diapers. Life is stranger than fiction indeed.

My close circle in day-to-day life knows this, of course, but I have not mentioned it here. It’s a weird thing to be — this nothing to the other child. Not a step-mom, of course. Or an aunt, or a side mom. A stranger really. But one whose children are half-tied. The thing about divorce is that it never really leaves you. It’s not a cheating boyfriend you can be angry at and avoid the rest of your life. As it turns out, it’s a whole other family who shows up in your driveway twice a month for weekend visitation. If you have any chance at all of inner peace, you have no choice but to face your shit, as people like to say.

That’s precisely what I have spent the last twenty months doing. facing my shit without distraction or avoidance. It is the hardest thing I have ever done. Like most things in life, you have to somehow just figure it out, though there is no roadmap. I’m figuring it out pretty well, I think. But I do often think about how much time it takes to get it all sorted out. How much I change from month-to-month. How much I learn with every experience, every conversation. How much every challenge leads me inward, inward, inward to what I alone can offer.

Life is just one big, long unfolding, isn’t it? You really don’t know where it’s going to lead and what will happen in the meantime. I’m grateful for the freedom to figure it all out in this season without demands or expectations, but I can’t help, in my flawed human nature, to wish I had binoculars to somehow see what lies ahead at the end of the road. I think the answers almost always surprise us all.

8 thoughts on “no roadmap”