My friends and I have had this weekend on the calendar for a while as a chance to catch up and do something fun. In the past few days, we decided maybe a North Georgia winery would be a treat, and we made plans for a tasting followed by dinner followed by staying the night at my house.

I wish I could somehow reach back to that person who was so itchy and uncomfortable in a house by herself. That person who was so scared and intimidated at a new life alone and trying to fit in new boxes. There’s this thing no one tells you about single motherhood after a divorce which is that it absolutely sucks sometimes and you think you might not make it out alive, but then once you get past the transition, your solitude will feel like a gift. You wake up. You suddenly have time again to do anything you want – to catch up with friends, to try something new, to dream and plan for what’s next, to invest in yourself. When you sink your heels in instead of trying to fly as fast as you can to the next chapter, you see it’s actually such an incredible place to be.

I woke up yesterday to the usual sound of the dog whining to go out. I let him out, brewed coffee, and took it back to bed with me. I read a little (a book that is not typical for me but I loved it) and drank a second cup of coffee in the bed, cuddled under my covers and surrounded by the quiet of a house that is clean, for once. I traded funny texts with a friend for a while and eventually got out of bed to do a little yoga and get in the shower.

When friends showed up in the afternoon, we piled in the car for a drive to the mountains just north of where I live and indulged in a wine and chocolate tasting at a small winery. 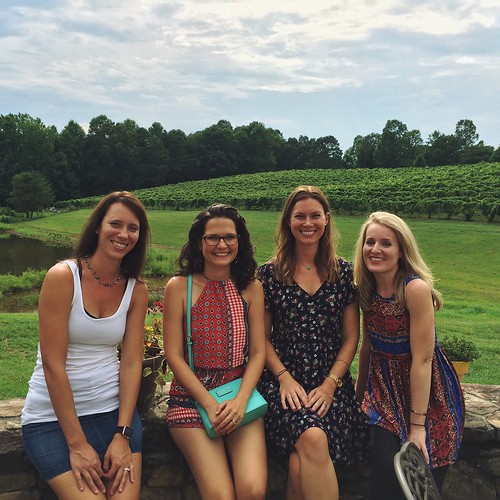 After we finished, we sat outside for a while with breezes that were more generous than the usual July heat and then eventually headed into the small town nearby for dinner and hours of conversation. We laughed a lot. We walked around in the blue summer dusk after dinner and then piled in the car to head back to my house. 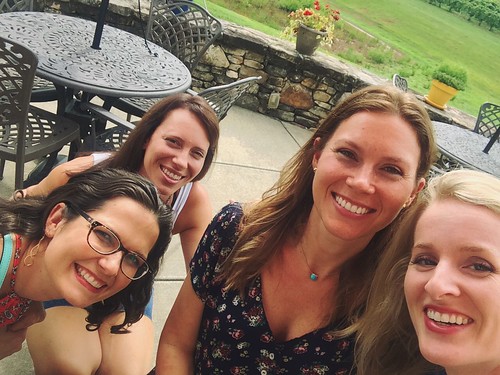 This morning, I made waffles with sliced strawberries and we talked about big and small things until well past noon before realizing what time it was. After they left, I headed to my neighborhood pool to sit alone in silence, swim a bit, and finish my book. This afternoon brought a few house tasks and a quiet dinner alone and now some time to write so that I don’t forget all these tiny pleasures.

I wanted to round out my summer by reading a book about goal setting and “manifestation” which is a term that understandably makes people roll their eyes. It’s not as easy as claiming you want something and having it delivered on your doorstep. But when I dusted off the journal I used at the Jen Pastiloff Atlanta workshop last year, I see this list of things that felt so incredibly far away for me that have become my daily reality now: writing for an audience of connected readers, deepening my friendships, feeling comfortable and authentic as a mom on my own with my two, a sense of home and community for us, comfort in my solitude.

These are things I lusted after a year ago as such far away goals, but when I look at my life as it is now, every one of these things is my daily reality. Every one.

I’m not done yet. I have more to do. I’m ready for the next chapter, and I think it’s going to be a big one. I wrote a list today in that same notebook, and I trust that these things are coming for me. Moving in the direction of joy is the answer, I think. When you feel that stir of curiosity, that voice that says yes this is it, you have to do it. There’s that famous Rumi passage that claims, “What you seek is seeking you,” and you can feel it push, push, pushing when you follow your own calling. It’s incredible to see the way your heart finds its purpose, bit by bit.

There are so many things I will never be because that is not who I am, and the older I get, the less afflicted I am by the list of things I am not and the more interested I become in the list of things I am. There are so many dreams I’m fulfilling that only unfolded after a long, meandering path that no human could ever have orchestrated. If I made a list of all the seemingly random occurrences that led to my life unfolding in the way it has, I would never stop writing. One tiny thing leads to another, leads to another, leads to another. And eventually you arrive at a destination that feels like home. I had no idea this season would feel like such a gift.