This was one of those work weeks that somehow felt so much longer than only 5 days. Little stresses here and there that add up to so much, and I was always dashing from one thing to another – both literally and mentally as well. It’s hard to just be still with yourself in those times. It takes a lot of effort on my part, effort to stop frantically moving from one task to another and just slow down.

I’m listening to the latest album by The Oh Hellos lately. There’s a lyric in one song (click here for a listen) that cuts me softly every time I hear it: I’ve learned a lot about the way of things. I learned that everything has breath inside. I forget I have breath inside sometimes and that everything else does to. I forget the power of breath. Yoga and meditation are so good to remind us of this, but outside of those experiences, I forget to listen to my own current. That steady reminder of life’s continuity.

I’ve changed so much in the past year – the past few months even – that it seems strange at times to think that it is the same beating heart in my chest, the same breath moving in and out. Same as it ever was, only maybe not. Because I feel it differently now than I did before. I feel everything differently.

The kids and I spent time today at my grandparents’ place which I’ve written about often as it’s so central to my own memories and my own identity. It feels good to come home to these associations, like the breath inside I mentioned before. A continuity that steadies you. This week was stressful, and yesterday was bitterly cold and rainy. But today we stood in the familiar and the sun made up for yesterday’s chill. Winter sunshine feels like such a gift. We collected eggs from the hens and walked what is left of the fall garden. Jude munched on raw kale that he’d surely push aside if offered on his plate, but somehow it felt like a treat when he plucked it himself. 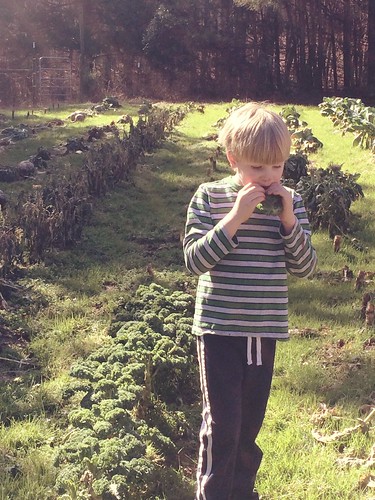 In the song that initially got me hooked on The Oh Hellos, they echo Hello my old heart, how have you been? Are you still there inside my chest? I’ve been so worried. You’ve been so still. Barely beating at all. I remember the first time I heard it when it appeared on my Pandora station last summer as I painted a room in the house soon after we moved in. It was late and the kids were sleeping, and I was working to bring something of my own to a place that felt new and foreign. The lyric resonated enough with me in that moment that I teared up a little.

We’ve all felt like that at times, I think. Like you’ve ignored your own voice and you have to press an ear to your own soul and listen hard to see what’s there. It’s easy to listen to the clamor of what’s outside and ignore that whisper that is only heard in stillness.

It’s coming back to me, my old heart. It’s changed shapes in many ways, but I finally feel it beating as it was before. Like that same breath that moves in and out. Those long-forgotten but familiar spaces are coming back. It happens in bits and pieces, but it feels so needed, like winter sun.

I ran across a Facebook post yesterday that featured one of my favorite Rumi passages I’ve quoted before. Elizabeth Gilbert expanded on that passage by suggesting, “Maybe the worst thing you ever endured was a crucible through which you became YOU. Maybe you could not have become YOU through any other means except by going through that trial.” It’s a weird thing, right? To journey so far and in ways feel like you just made your way back to the beginning. The you that you always should have been. The old heart emerging again but softer and braver than it was before, feeling the pulse underneath the noise.