Last week crawled along at the slowest possible pace. We’ve had weeks and weeks of steady rain in Georgia, and I’d forgotten what the sun looks like. It’s back this week though, and I can hardly believe tomorrow is already Thursday. It’s amazing how many little factors can influence your outlook.

We discovered a little trail in the woods behind our neighborhood yesterday, and Jude wanted to go for a quick walk again today the minute we walked in the door. I ignored any other nagging responsibilities, and we took off. Norah and I followed behind him, and he felt proud to lead the way. We ended up at a little pond before turning around to head back home just before sunset. 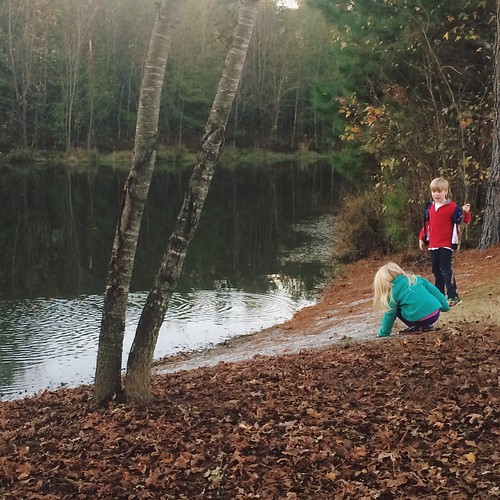 Little gifts are stored for me along the way when I have eyes to see them. I listen to Rob Bell’s podcast every week, and the episode I heard this week was titled “Increments and Explosions.” He discussed the secrets of people who, as he put it, grow younger instead of older. Grow lighter instead of heavier, softer instead of harder. The key as he sees it, and I agree, is personal growth. And this growth sometimes happens in increments when we create the little habits that shape our perspectives and lend us room to grow. It’s the result of daily work. Then, of course, we have the explosions – the moments life explodes the experiences set forth to give us growth even if they are painful and we don’t quite feel ready for them.

November is a big month for me, a huge marker in 2015. The first year following any tragedy or hardship is rough, as anyone will tell you. And when you can pass all of those reminders, watch the four seasons come and go again, and know that you survived, it feels like you’re finally able to exhale. I’ve still got a few markers and reminders left in front of me in the weeks ahead, but I am almost there. I’ve almost arrived at the clean slate marking a full year alone.

I look back at this entry from last November and cry a little for that person. I felt so scared of what was ahead. I had no idea how bright the sun was shining on the other side.

I’ve grown in explosions since the night I wrote that entry – the initial one, of course, plus some other big moments. But so much of it has been in little increments, too. I’m so glad, as I near the end of this instrumental year for me, that I have this journal to look back on. I think gratitude (as a true daily practice, not just the concept) has been the driving force behind my incremental expansion. And also pause and insight. And truly feeling the painful discomfort that has unfolded sometimes as I’ve broken in this new skin, no matter how much I wanted to numb it. All of those things have lended me growth.

And most of all, writing has become such a guidepost for me. I’m not certain how I would have survived the year with clarity if I didn’t have this space and this practice of putting words together without an aim or destination.

I feel fearless in a way I never have. I think that’s what happens when you spend time in “no man’s land” as Pema Chodron calls it. What you previously thought was the worst thing that could happen has already happened, and you survived. Not only survived but grew bigger. I’m not scared of much of anything now. Life ahead is a vast empty space, and I have no idea where I will go or what I will do, but as I look back at the past year of my life and increments and explosions that landed me here, I think I’m meant for something that could only happen on this path.