I love to travel.  Love it.  Seeing new places, eating new food, cramming clothes in a suitcase with plans in my head.  For various reasons – namely money and real jobs – I am not as extensively traveled as some I know, but pre-Jude, Scott and I would take trips whenever we could, some not far from home, and some a little farther.

It’s so hard to try and imagine how your life will change after having a child.  I think it’s actually pointless to predict it because parenting is something that, for me anyway, kind of evolves on its own.  I expected to drop the baby off at Grandma’s house often for a night out or a longer trip away.  I expected to want “me” time really frequently.  I expected to feel a little trapped and overwhelmed in this role. But life surprises you sometimes and things don’t always progress the way you expect them to. 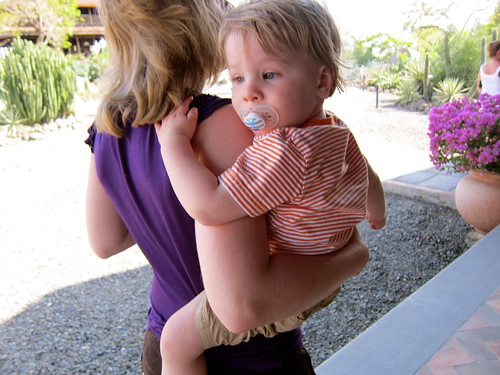 So when we first began to talk about a trip to celebrate my thirtieth birthday, I never even thought about leaving Jude at home. Not that couple time isn’t a good thing, of course. But he’s so young and so a part of us that I jumped in with both feet and dragged a toddler to Costa Rica.

I know everyone has varying opinions on this, but I love traveling with a baby. We took him to Seattle when he was nine months old, and things went well, so I wasn’t really thinking about any reasons not to take him this time.  That said, as I began to plan the trip and share details with others, some people told me in not-so-confusing terms that they thought I was crazy or even unfair to my child to drag him along.  I did it any way, and I’m so glad I did.

My thirtieth birthday trip to Costa Rica was such a fun adventure.  But I learned a few subtle lessons, too.

As we landed in Liberia and waited in line at customs, I saw two young couples arriving from the states as well. The women were complete from head to toe with beachwear on their backs, coordinated luggage, and glossy lipstick. Obviously four childless folks vacationing together with grand plans of piña coladas at the shore and deep tans to bring home as souvenirs. And as I looked at them with my toddler in the carrier on my back, I glanced at a shadow of my former self. One without worries of proper water safety and preserving the sacred nap time. One who remembered to wear lipstick and didn’t find my bra hanging out of a stained shirt after a four-hour flight with a busy kid.

And those travel days with fewer worries and more time?  They were lovely.  I’ve cruised the Seine at night with Paris illuminated before me.  I’ve strolled Nantucket’s cobblestone streets with not a single concern in my mind.  I’ve lingered far too long over a bottle of wine with friends in a restaurant that would never work with my child in tow.  I’ve sipped tea leisurely in Grantchester Orchard with a stack of school books in my bag.  I’ve walked the gulf sand with girlfriends and cold beer and silence punctuated with some of my life’s best conversations.  And all of those moments were just as perfect as they sound, lasting stamps in my mind.

But here we are at a new place with some pretty beautiful moments as well.

Was every second of the trip perfection?  I’d be lying if I said so.  There were no fewer than three tantrums on the plane ride there.  There was a rushed dinner that felt far too long because we traded off toddler-duty, walking rounds to satisfy a tired and cranky boy.  There was the constant need for a pacifier so that he’d stop eating random, potentially dangerous things.  Relaxing poolside is impossible when he’s vulnerable and can’t swim, and admittedly I relished the glorious hour of naptime when I lounged and read alone under the hot sun.  Traveling with a child is not for the faint of heart.  But then again, neither is motherhood.  Just when the newborn haze wears off, you get the hang of things, and then the mobility begins and you wonder how you got here.  You find a way to make it work though.  Now I just look for a playground in walking distance from my relaxing beachside margarita.

Our first day in Costa Rica, we were poolside next to an older couple from Indiana.  They commented on Jude’s cuteness, and we began talking.  They spoke of grandchildren back home they missed, the ten-day tour of Costa Rica they were ending, and the beautiful sights they’d seen.  And as we spoke, I realized something.  Life moves on.  And these stages, however easy or hard they may be, only last for a little while.  Right now I have this wiggly daredevil who wants to run and scream and play, and it’s fun but exhausting.  Soon I will have an active swimmer who won’t stress me out so much in the pool or make a scene in a restaurant, but I’m sure I’ll miss chubby little hands and feet.  And later still, I hope to travel with a teenager who can hold his own in a conversation with me and understand the historical significance of some of the world’s greatest places.  And much, much later, we’ll have those childless trips again, wandering city streets and seeing sights without worrying about taking care of someone else.

So I guess if there’s one thing I’ve learned in this few weeks of my thirtieth year it’s that this might be the end of certain parts of my life, but it’s only the beginning of a lot more.  That and I love belonging to my little family, whether we are near or far.

5 thoughts on “Beginnings and Endings. And Traveling in Between.”