I can’t believe another month has passed.  It’ll be summer in Atlanta before long, and I’m ready for some steady warm weather!  I’ve written before about my crafting resolutions this year, and essentially – to catch you up if you missed it – I just want to actually finish things instead of having all of these unfinished craft endeavors lying around my house all the time. The hardest part about this monthly committment is accepting some mistakes along the way and realizing that complete and imperfect is better than any kind of incomplete.  At this point in my life anyway.

On that note, check out my yarn and needles hanging out in their new home. 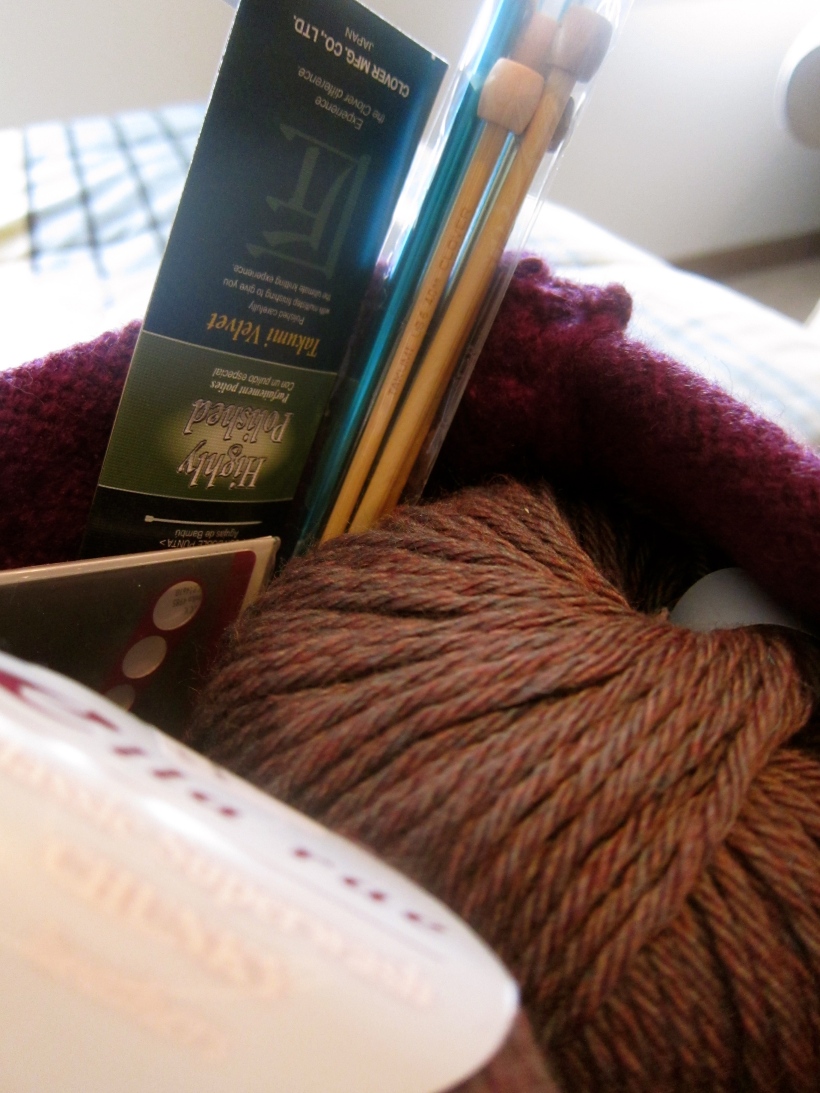 I cast on for a felted cable bag way back at the first of February, and I am just now wrapping it up.  I am really practicing the art of embracing imperfections though.  Behold.  The eye sore.

The problem with this pattern (or, ahem, the user of this pattern ) is that it’s repetitive enough that you feel like you can knit it from memory once you get the rhythm and watch television rather than stare at the written pattern.  Then again, it’s not so repetitive that a newbie knitter like me should do that — hence the funky problem on the cable where I went the same direction twice.  I know how to backtrack and fix a mistake if it’s simple in nature, but I got all twisted (no pun intended) in whatever was happening with the cables, and I was too lost to fix it at that point.  But the good news is that it’s done, and the old me might have given up, but instead I said it’s almost the end of the month and I want to finish this, so imperfect or not, here we are. It’s my second completed knitted project ever, so I’m thinking one day that ugly mistake will be sentimental.  Awwww, look at my mess-up before I was any good at knitting.  …..Probably not, but whatever.  It’s done.

It holds a lot actually, and it is designated for the important job of holding my knitting gear because if my yarn is overflowing that bag, it’s a sign I need to buy less and knit more.  I got a shelf for my little craft area, and it fits nicely atop the shoebox of paints and next to the file of patterns. 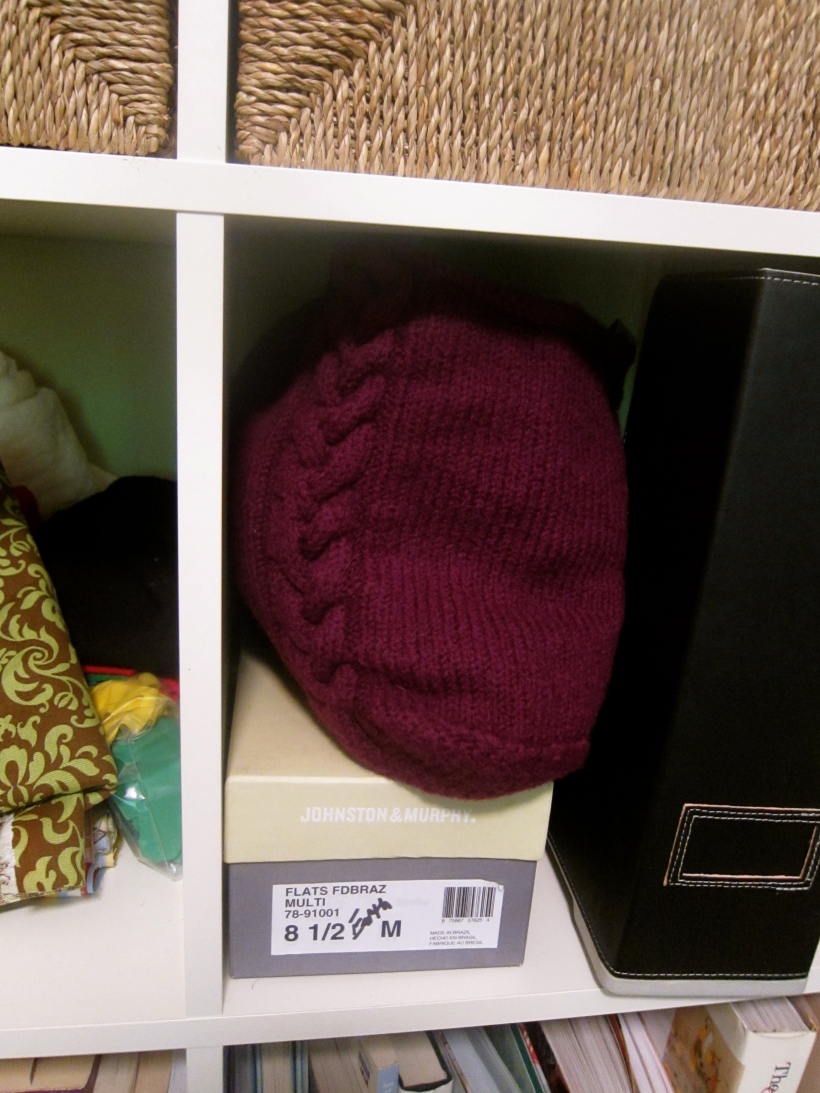 I also finally put together a sewing machine cover for the same craft area.  I’ve been needing to do this for a while because my machine tends to sit for weeks between use and get a little dusty.  It’s a sweet little cover with a large pocket for scissors or a current pattern or scraps or whatever.  I got the pattern from this book, and I want to make one of everything as I flip through the glossy pages.  So many awesome ideas! 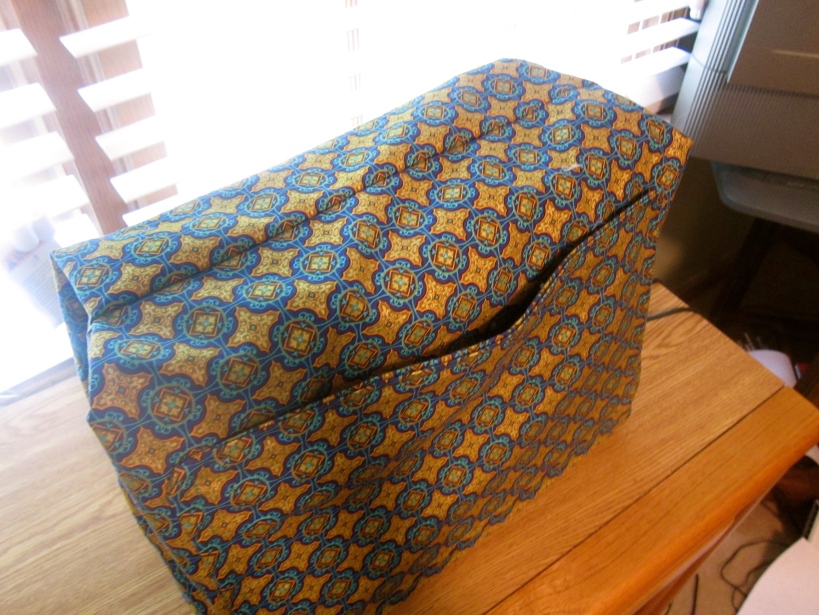 Last but not least, I completed some of Jude’s second year book as well. We had no real major events this month and no big holidays, so I decided to do something fun and casual and telling of where we are right now. 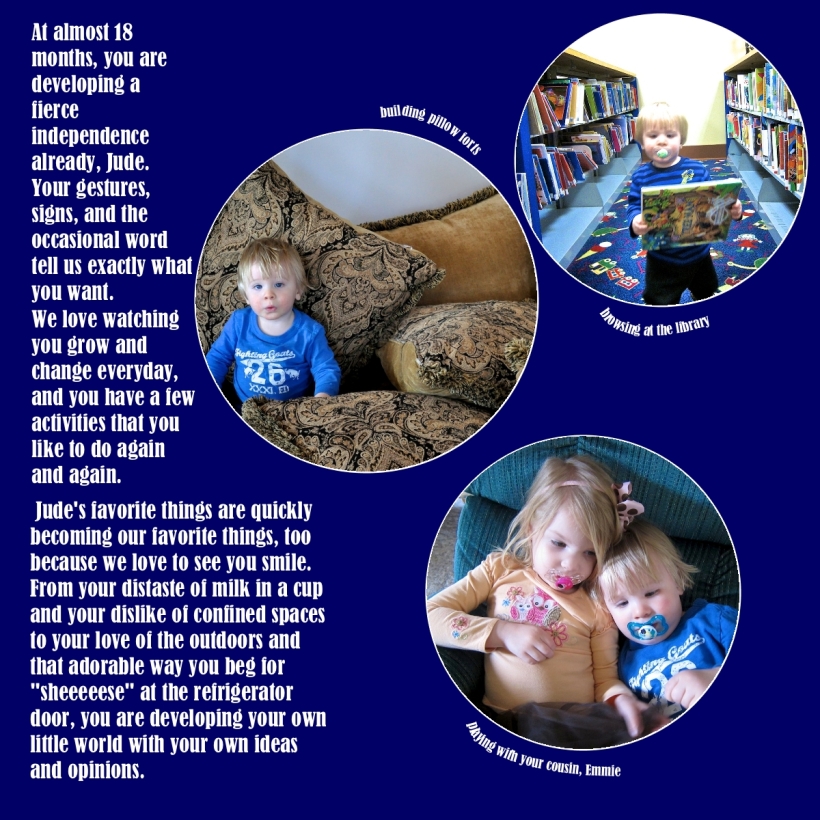 The program I use is far from professional, so the text wrap doesn’t really work that well.  I’m still trying to tweak the captions to look better, but for now, it’s complete!  So those are March’s crafty projects, and when I look back, it actually makes me feel like I got a lot done this month.  I was afraid my less-internet rule would cut in to crafting time since I’d want to get online at night or during the occasional free naptime, but that hasn’t really been the case. On the whole, being online less seems to make me want to be online even more less. (Is that even a logical phrase?)  And I usually spend evenings checking in for a minute, sharing an idea or link I’ve run across, browsing what others have shared that day, and logging off until the next day.  The rhythm is developing so well that I think I’ll leave those apps off my phone even after Lent.

Crafting is on hold for a little while, and April’s project will have to be something super quick and easy because I’m heading for Costa Rica in a few days.  Did I mention that yet?

I’ve been busy checking off lists and will soon be packing our bags.  We’re cashing in the husband’s travel points for a big 30th birthday bash (5 weeks later) for me!  I’m super excited, and I’m pretty sure taking a toddler to Central America means I’m either adventurous or insane; it’s a close call. But Seattle last year was pretty smooth sailing, so I’m super excited.  We’ll be reading and relaxing indoors everyday during naptime, so I’ll post likely post a photo or quick hello from there next week.  (If there’s one thing I’ve learned about traveling with a baby or toddler, it’s don’t skip naptime.) The resort offers all sorts of cool day trips to some rainforest areas and some really cool volcanoes, but with a toddler in tow, I’m thinking it might be easier to hang around the resort  or only venture to the couple of closer neighboring towns.  We’ll see. I have a feeling my gratitude list will be pretty long next time I post.

I hope you’ve had a lovely March and welcome the warmer days of spring ahead.  Until then, pura vida, friends!